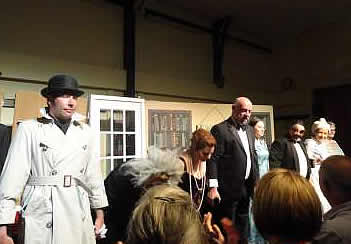 Taking a bow at the end of the evening

The Bridge Players Summer Production consisted of two short plays directed by Morag Underwood, preceded with a delicious glass of Pimms – altogether a recipe for an enjoyable evening!

The first play "What's For Pudding?" is a comedy demonstrating how a simple question can get blown out of all proportion. A simple but effective set found us sharing Jack and Mary's 1972 living room just after dinner. Jack (Dave Bridger) is dozing replete on the sofa, he is rudely awakened by Mary (Bryony Worth) and asks the question "What's for Pudding?" This prompts a convincing tirade from Mary announcing how bored she is and how boring their life is and that pudding is definitely not on the menu.

Their row is interrupted by the unexpected arrival of friends Ted and Maureen (Jonathan Oldershaw and Zoe Dyndor), and Denise (Becky Leitelmayer) who wants to order a pair of brown trousers from Mary's catalogue. Sarcastic barbs fly entertainingly to and fro whilst Jack and Mary try to cope with their guests, plying them liberally with whisky and discussing a future night out. Becky Leitelmayer showed excellent comic timing in her obsession with the mail order catalogue.

The evening slides rapidly down hill, with spilt drinks and emotions running high. Finally the reason for Mary's mood is uncovered when she accuses Jack of forgetting their wedding anniversary the following day, of course Jack hasn't forgotten and produces a card and gift and all is forgiven. The cast members kept the fun and laughter going throughout the play which was very entertaining. 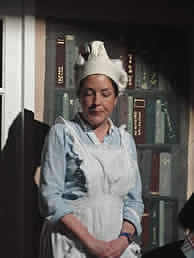 Christine Bridger as the cook in Streuth

Following a short interval and the opportunity for another glass of Pimms the audience settled down to enjoy "Streuth" by Michael Green a play from a series of plays for Coarse Actors, deliberately written so that if you do them well they are so bad they make you laugh. Being pre-disposed to this kind of humour the play made me laugh out loud more than once.

Set in a Church Hall with a make-do set the play opens with a lovely cameo appearance by prompt Val Smith introducing a fictitious amateur dramatic group putting on a murder mystery play to raise funds.

A murder has been committed, the corpse lies in front of the D'Arcy family (Dave Bridger, Sarah Adhemar and Zoe Dyndor) who, together with the Major (Becky Leitelmayer) are being interrogated by the hapless Inspector (Jonathan Oldershaw). The murder victim is identified as Henry, Mr Darcy's brother who is clutching a document which of course no one has noticed! The Inspector deduces that as there is no sign of a break-in the murderer must have known the layout of the house. Mr D'Arcy names his long lost brother Rupert as the only other person who would know this. The fun continues apace with theatrical disasters, wobbling sets, missing props, a decanter which doubles as a ringing telephone, doors that won't open and spotlights that spot in the wrong place.

James the Butler (a heavily disguised Bryony Worthy) arrives on stage to report an earlier sighting of a stranger with a big black beard, the Cook (Christine Bridger) is called and arrives on stage trying to find her place under a non-existent spot light, and gives her version of events with an accent worthy of Eliza Doolittle.

A knock at the door eventually reveals the vicar (John Coatsworth), complete with large black beard (well it makes a change!)

One of the funniest moments of the evening follows as the "vicar" takes the document from the corpse and is unmasked as Rupert the missing brother and murderer of Henry. An incorrect line innocently delivered by Helen D'Arcy (Zoe) results in this sequence being repeated several times despite her frantic attempts to go through the script and find her place. Very funny.

It looks easy to do theatre badly but it is in fact very difficult. Every member of the cast more than rose to the challenge and provided the audience with a thoroughly funny and enjoyable evening. 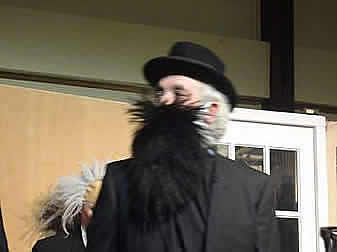 John Coatsworth as the vicar 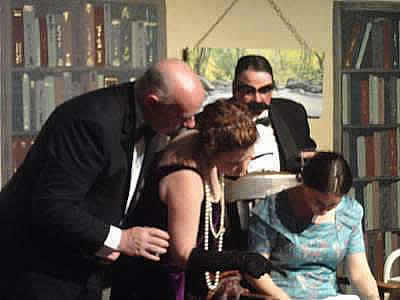 A scene in Streuth

The lighting and sound effects were brilliantly operated by Bob Duncombe and Felicity Dyndor. Costumes and make-up were excellent and all back stage and front of house people ensured a very smooth performance. Well done everyone and thank you!