In 1995 John Raybould tutored a course entitled "The Changing Village". It covered the last hundred years, and focused on Helmdon. His enthusiasm lingered after the course was over, whetting the appetite for further historical research, and several members of the original class formed themselves into a local studies group. At the beginning, Val and Stewart Moir, Judy Cairns, Audrey Forgham (fomerly Harwood), Jean Spendlove and the late Will Watson were the main members. In Spring 2000 two new members, Danny and Kate Moody, joined the group, both very interested in the difficult-to-unravel early history of Helmdon. From the outset, the group felt that what was researched should be recorded in some way and so, steered by Ross Vicars in the early years, and then by Audrey Forgham, 'Aspects of Helmdon 1' was published, followed later by 'Aspects of Helmdon 2, 3, 4, 5 and 6'.

All articles contained in these publications were copied to the History Resources section of Helmdon's original village website. The articles are now available via the historical articles index (on www.helmdonhistory.com).

Aspects of Helmdon No 1 (1997) contains analysis of census information and articles on the Old Bakehouse, the railways of Helmdon, and lace making, as well as an article on the recording of oral history and an example of it.

Aspects of Helmdon No 2 (1998) contains an article on Helmdon Enclosures of the eighteenth century, work on the four public houses (only one remains), an account of the work that went on in the village (church churchyard, chapel war memorial, etc.) transcribing the inscriptions, and the wartime reminiscences of Mary Turnham, Harold Seckington and Alice Hearne.

Aspects of Helmdon No 3 (1999) contains a history of Helmdon School from log books 1872-1990, by a former head master. Also The WEA (40 years in Helmdon), a contribution on Wine and Wild Flowers; and the reminiscences of Marjorie Watson, née Gulliver, whose childhood was spent at Grange Farm. Copies available as below.

Aspects of Helmdon No 4 (2001) contains the Story of Jeffs Coaches, a focus on Cross Lane, the Manorial history of Helmdon, the Story of the Gullivers, History from Falcutt Fields, and an article about Helmdon Stone and the Roll of Honour of Old Boys of Helmdon Council School serving in the Great War 1914-1918. Copies available as below.

Aspects of Helmdon No 6 (2008) It contains articles on Helmdon Buildings - Continuity & Change, Reminiscences of Evacuation from Malcolm Care, The Watsons - The Story of a Family, Reminiscences of Joan McCann, The Helmdon Cart, Glebe Farm Barn (with photos of the 1844 wash paintings of the old rectory), Reminiscences of Noreen White, In-Service at Falcutt House in the Thirties, Within Living Memory, and Helmdon from the 1901 Census Records.

The creation of a Helmdon website was first mooted in 1999. Maintained by the Helmdon branch WEA with Danny Moody as Webmaster and Audrey Forgham as Website Editor, the website www.helmdon.com became a very comprehensive resource for the whole village. Please click here for more information.

2014 was the 100th anniversary of the First World war and in November 2014 a War Memorial project was published on the website to find out more about the history behind the names of the servicemen on the Helmdon War Memorial. The document was subsequently updated in 2016. Please click here for more information / to view or print the latest version.

In 1997-8 the group, under the direction of Val Moir, transcribed the inscriptions in the parish church, churchyard, chapel, war memorial and elsewhere round the village. There are over 500 entries, beginning in the mid-seventeenth century. Where possible the most appropriate entry in the burial register has been added.

In 2013 a group reformed to make a random list of all new the grave inscriptions in the churchyard since 1997. (Hard copies are with the church, the WEA and the school.)

2016 saw the completion of a new project, to list the graves in rows combining the graves with pre-1997 and post 1997 inscriptions in the newer arm of the churchyard, to the left of the church path. The rows have been re-numbered. Judy Cairns did the bulk of the research, Bill Elkington made a map, Conrad Woolley checked the rows and Audrey Forgham typed the project for the website. Printed copies have been given to the church.

The Memorial Inscriptions page (on www.helmdonhistory.com) gives a complete listing of all the memorial inscriptions found at the church and around the village. There is also a plan of the churchyard made in 2016 which shows the location of the various gravestones.

2016 was the year when the combined WEA / church project to catalogue all the church kneelers was completed. Jenny Overson and Mary Nash did the bulk of the research, Colin Nash took the photographs and Audrey Forgham typed the project for the website.

Albums will be placed in church for all to look at. The Kneeler Project page (on www.helmdonhistory.com) shows a complete listing of all the kneelers with photos and descriptions, etc. 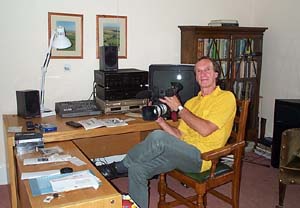 The Helmdon WEA branch have made a film called "Helmdon 1999 - A Year In The Life Of A Village". It was shown to members in April and over 200 Helmdon residents in June. The filmmaker, Richard (Willy) Watson, has been highly praised for his work in putting the film together, which portrayed the activities in the village throughout the year - the Carnival, the Remembrance Day service, the pantomime, the school sports, the Women's club meetings, and so on.

The film has been made for posterity, for people to look back at in say, fifty years time, and find out what made a village "tick" at the turn of the millennium. It will be sent as a video disc to the Parish Council and to the Northamptonshire Record Office, together with a typescript to explain more about the activities. 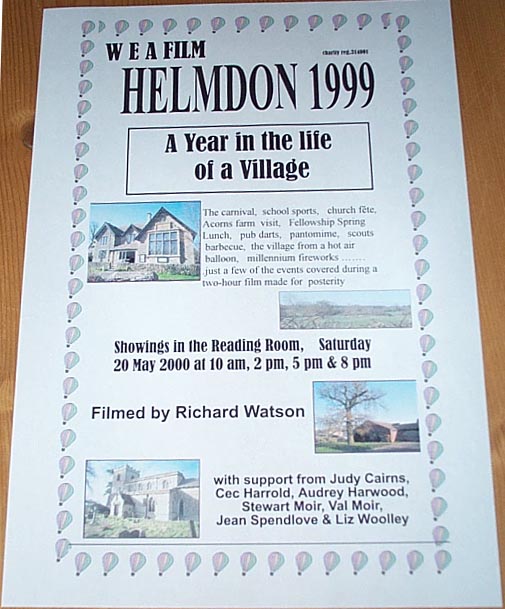 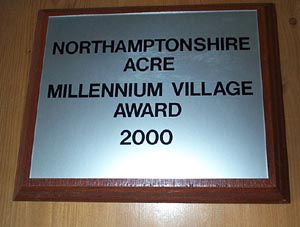 The Helmdon Village film was partly funded by the National Lottery.