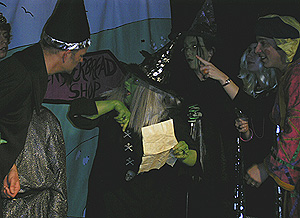 It's probably unfair to say this was the best Bridge Players Panto ever - they're all fantastic - but this was definitely right up there.

The Christmas Panto 2007 was Trouble in Pantoland (by Sharon Hulm), directed by débutante director Felicity Dyndor - a.k.a. "Fizz".

The story begins in a deep dark hovel where three strange ladies (Becky Leitelmayer, Eleanor Shepherd and Zoe Dyndor) prophesise that the evil wizard "He whose name no one can remember" (Brian Austin) will become King of Pantoland.

To make a brew of strength, you bubbled
To make a brew, I've toiled and troubled
And now, charmed cup, reveal to me
This dark stranger's destiny!

The Wicked Queen of Pantoland (Sue Blackburn) thinks that she should be the most wickedest one in the land - in fact, so evil is she that when Number One (Michele Rimmer) tells the Queen that it is the wedding of her son, Prince Charming (Fraser Turner) the next day she will only buy him a toaster... and a toast rack. Boo! Hiss! 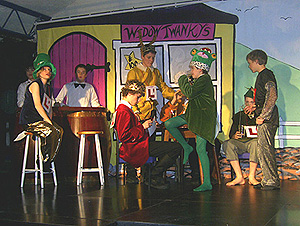 The jolly princes guffaw over an ale.

At Prince Charming's stag night the jolly princes compare notes on their girlfriends. Prince Charming's love is, of course, Cinderella (Kate Blackburn), whilst Prince Gwain (Jonti Bridger) has hooked up with Snow White (Rosie Griffiths) and Prince Wilhelm (the hilariously lisping Hector Sharp) is dating 117 year-old Sleeping Beauty (Fiona Percival). The princes are joined for the frivolity by Aladdin (Lachlan Fitzroy-Ezzy), King Arthur (Kurtis Butler) and Robin Hood (Laurence Sharp) but when the wizard crashes the party he turns them all to stone... all except Frog Prince Robert (James Wroe) who hops it to safety and raises the alarm back at the castle.

Oblivious to the danger Widow Twanky (Paul Stothard (who else!)) is back at her shop trying to make an honest living. Her "Saturday boy" is Bert Butterfingers (Neil Smith) but he spends more time day-dreaming about Amelia Sweetheart (Emma Griffiths) than getting on with his work. The trouble is that Amelia has already found her one true love and confides to Widow Twanky that she loves, not a man, but the Frog Prince.

When the Frog Prince misses a rendezvous with Amelia Sweetheart she knows something must be terribly wrong and she begs Widow Twanky to use her crystal balls to find out what.

Crystal ball, show me clear
The one who's green - is he near?
Does he leap from leaf to leaf,
Or has he come to some terrible grief?!

Widow Twanky sees that something is terribly wrong and takes Amelia and Burt to the Queen's castle to find out what has happened to all the prince heroes. But the wizard - He whose name no one can remember - has already wreaked his evil across the land and the Queen is powerless against him. But wait! In comes the Frog Prince and the Queen uses her last ounce of power to turn him back into the real Prince Robert (Matt Sleath) who can now save the day!

The Pantolanders spend a fearful night within the castle walls waiting for the wizard to attack, whilst all around are ghouls and ghosts. The castle is guarded by the Captain (John Plunkett) and his guards (Kate Blackburn and Jonti Bridger) but the hapless trio cannot keep out the wily wizard - he's behind you, he's behind you!!

In a showdown between the wizard and Prince Robert the coup de grâce comes when Robert uses the Magic Mirror (Georgia Crouch) to reflect the wizard's dastardly magic back at him and turn him into a toad! 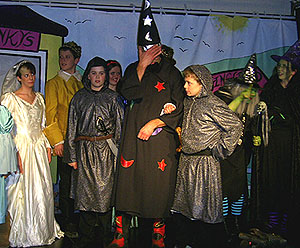 He who no one can remember his name
- it turns out to be Susan!

Taking pity on the wizard, the wicked Queen relents and turns him back into a wizard but gone now are his powers - especially when the Queen realises that she has met him before - He whose name no one can remember - and remembers that in fact his name is Susan! Cue the Johnny Cash classic "A man named Sue"!

With the wizard beaten and the princes released from his spell all is now well in Pantoland and, yes, everyone lives happily ever after!!

Very many congratulations to the entire cast, the chorus lines and the band (John Plunkett, Leanne Griffiths, Jonathan Ruffley, Gareth Dean and Andrew Storer). And not forgetting all the back-stagers without whom the show would not go on. The stage was designed and constructed by Ros Spence and Peter Fisher and managed by prop-hands John Coatsworth, David Dyndor and Val Smith. The lighting and sound was controlled by Jo Moore and the makeup was brilliantly crafted by Jess Quiney, Michele and Nicole Rimmer and Ann Dyndor.

If there was a fault with the Panto it was the absence of Dave Bridger for the first time in years. Let's hope he hasn't hung up his bra and wig for good!

Helmdon is very lucky to have such a band of fun-loving, hard-working, dedicated performers and the Panto has really kicked off the Christmas festivities in style.

Director's Thanks:
Thanks to: Dulak of Brackley for supply of props and costumes. Seckington Stores of Helmdon for ticket sales. John Plunkett for being my right hand man - no job too big for him! John Coatsworth for making the throne and David Dyndor for construction of the magic mirror and castle turrets. Nicola Dent for set help. Dave Bridger for production of tickets and help with the stage. Andrew Storer for sound equipment. Ros Spence for the amazing sets. All the backstage, front of house and make-up crews, the entire cast (thanks for making it such fun), and finally, my big sister - Miss Zoe Dyndor, without who this Panto would not have happened.