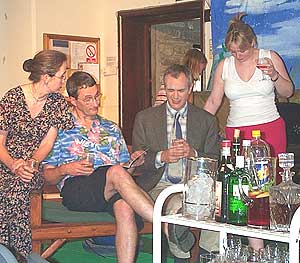 Derek proves that not even money can buy happiness.

Once again the Helmdon Bridge Players scored a triumph with their summer 2005 production, a comedy directed with great pace and excellent timing by David Bridger, who was directing the summer play for the first time.

There was an air of eager anticipation in the auditorium (the Reading Room) as the audience entered to see a backcloth of garden fence and bright blue sky behind a very effective set (designed by Peter Fisher) consisting of well-placed patio furniture and loaded drinks trolley on a grassy floor. In addition there were intriguing notes on some of the front seats warning people to keep their legs out of the way during some of the entrances and exits. It transpired later that this was very good advice, as one of the exits in particular involved virtually the whole cast at great speed!

When the play began it soon emerged that we had a group of ten differing and individual characters each of whom has an agenda of their own. The 'Helmdon and District Operatic Society' is meeting over a barbecue to hear the all important announcement from Nick, the Society's manager, of his plans for the next production and the casting of the plum parts. John Plunkett, as Nick, didn't have to wear a dress this year, but his character did have an awkward time dealing with the threats, bribes, wheedling, tantrums and tears of his troupe. John gave an excellent performance as a man whose underhand scheming leads him into more and more trouble. Jo Ezzy, giving one of her usual polished performances, was Nick's wife, Roz. Unaware of much of the plotting of the other characters, she tries to keep the evening going as an enjoyable social event, providing continuity to the play at the same time. 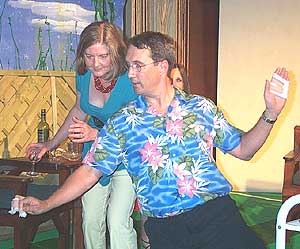 Among Nick's problems is boring, depressed Derek, played with endearing pathos and humour by Paul Underwood. Derek desperately wants his wife, Deirdre, to come back to him before their divorce is finalised, and is prepared to finance the next production provided it is 'Sweet Charity' and Deirdre plays the lead. Teddy is equally desperate to play Curly in 'Oklahoma' before he is too old, and he has a trump card in that he has the power to throw Nick's badly behaved mother out of her care home. Paul Stothard brought a lot of vitality to the stage as Teddy, playing him as a hilariously camp 'luvvy' but never tipping over into caricature.

Another problem is poor Joyce who, inclined towards inebriation, needs to live down the previous year's disastrous performance as Calamity Jane. Bryony Worthy portrayed her with great skill, causing a lot of laughter but always retaining our sympathy.

Morag Underwood was very convincing (as ever) as the self-centred Mona who is desperate to show her talent for choreography by persuading Nick that attractive newcomer Jessica will make a perfect Maria in 'West Side Story'. Devious Nick has already offered a lead role to Jessica in return for some casting-couch favours! Fliss Dyndor gave an incisive performance as the rather arrogant, flouncing Jessica.

Meanwhile the worried treasurer of the Society, Pearl, a less colourful character than some of the others, is trying to impress on everybody that there is a serious lack of funds to pay for any of the grandiose plans suggested. Pearl was played quietly and effectively by Eleanor Shepherd, in her first appearance with the Bridge Players.

Derek's wife Deirdre was played with great assurance by Barbara Cox. Much comedy ensues when Deirdre arrives along with slightly eccentric Eddie (ably acted by Neil Smith), a young man she has only just met. Eddie hilariously shows that he will go to any lengths to ensure that the televisions in the house are in good working order, and the combination of his activities with aerial and ladder, injuries to Teddy's hands when the stubborn barbecue refuses to light, and Derek's threatened suicide from the rooftop all cause uproarious chaos. In addition, all the stresses and strains of the characters' inner desires and aspirations, plus their relationships with each other, lead to a lot of enjoyable confusion and a happy outcome, at least for poor Derek.

This seemed to bring everything to a satisfactory conclusion, but to everyone's delight the whole cast gave a stirring glimpse of how fabulous their 'Sweet Charity' might have been as they sang 'If They Could See Me Now', complete with glitzy cabaret hats!

Barbara, Neil and Fliss are all comparative newcomers to the Bridge Players, having made their debuts in last year's pantomime. It's wonderful that so many talented people live in Helmdon and not just performers; it was obvious that a lot of ingenuity and hard work had been put in behind the scenes as well. As a previous reviewer has said, we are very lucky to have the Bridge Players giving us such a high standard of entertaining drama. Long may they continue!