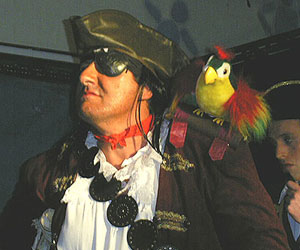 Long John Silver and his parrot.

A pub full of euphoric actors for three nights running can only mean that Christmas has once again arrived in Helmdon with the presentation of the Bridge Players Pantomime.

What a feast for the eyes this production of Treasure Island turned out to be on a typical winters evening. Acting aside, for the moment, the quality of costumes and stage sets was quite superb in creating the ideal atmosphere for all of the scenes ranging from the smoky, salubrious Admiral Benbow Inn to the ship-shape deck of the HMS Golden Behind and then on to a deserted Caribbean island. Without a doubt, all those who watched this pantomime could not fail to have been transported into the story.

Under the watchful eyes of Richard Pamment (Squire Trelawny) and enlarged bosoms of Dave Bridger (Dame), new boy on the block Fraser Turner (Jim Hawkins) put on a sterling performance in his first major role as hero and love interest to the equally talented, seductive and winsome Kate Blackburn (Polly). An insider reliably informs us that the on-stage chemistry between the two goes no further whatever you may read in 'Hello'. 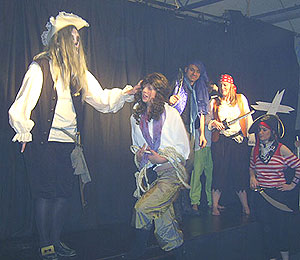 Nicola Dent (Captain Flint's Ghost) and John Plunkett (Long John Silver) succeeded in scaring the living daylights out of young children in the audience while delivering vivid and powerful performances as evil Pirates; certainly enough to make Johnny Depp look like a girls school library monitor and for children throughout the village to tremble at the mere mention of pantomime in years to come.

The host of other characters playing pirates, servants, jungle animals, castaways, sailors etc is too long to mention but each and every one played their part so well that they created the substance which added so much to this performance and gave the overall grand effect.

As for the content, all of the proven essentials for a successful pantomime were stylishly captured and presented to the audience in a performance which provided first class entertainment. The strong line up of international and village stars fittingly cast in suitable roles delivered a 'tour de force' performance which had people "rowing" in the aisles.

The entire cast, musicians and behind the scenes helpers have to be congratulated for their hard work in putting on a marvellous show under the guiding hand of Director, Val Smith. A standard has been set which will give the Bridge Players something to aim for in the coming years.