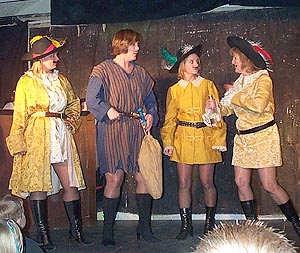 Whose line is it anyway?

The annual Bridge Players Pantomime has become a firm favourite around Christmas time. The production is always well supported - so much so that tickets usually sell out for all four performances - and The Three Musketeers was no exception. Involving over 70 people in total, from actors to back stage support, it really is a 'village' event.

Set mainly in France, this years 'panteau' told the story of their King, Louis XXVLIIVVLIIIXXXVIII, and Anne his Queen who was enjoying a dalliance with the English Prime Minister the Duke of Tottenham - despite the attempts of the elegant Lady Constant Hoh-hi-hon to keep her on the straight and narrow. (How could this lady be married to the slimy Monsieur Hoh-hi-hon - a snail farmer?)

The King's power is always under threat from the evil Cardinal Richeleeugh and his henchmen (and henchlady) but he can always rely? on his trusty Three Musketeers to rally to his assistance (when they were not wenching, drinking or eating). Add to those three; Dame D'Artagnan and her ambitious son D'Artagnan, whose attempts to assist usually had the opposite effect.

Full of fun, the panto worked on two levels, providing much obvious humour for the children and more subtle jokes for the adults (e.g. the Duke to Anne on fearing the must destroy her love letters "I could never destroy your French letters - their contents will be with me for ever" and you will see what I mean). Judging by the audience reaction on the night I attended, they enjoyed the humour and often added their own. As always there were a couple of sharp kids in the front who did their best to liven up the proceedings - on occasion reducing the cast to laughter with some of their comments. 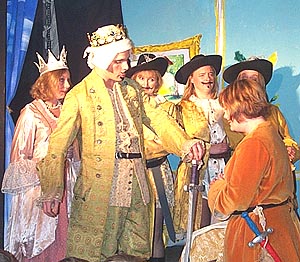 Unlike most past productions, The Three Musketeers did not have one or two major roles but instead offered substantial parts for most of the players. This must have added to their enjoyment and gave the audience the opportunity to enjoy some delightfully complete performances from many of the cast. Too many to mention individually, it is worth picking out one or two for special comment.

The newcomers John Plunkett, Gareth Dean, Michele Rimmer, Richard Pamment, Sophie Chapman and Louise Brownhill were all excellent and will, I suspect be making appearances in future productions. Paul Stothard gave a competent performance as the Dame - he does look very comfortable in those dresses and Dave Bridger played his usually solid baddy (he looks more solid each year). The Three Musketeers (Jo Ezzy, Bryony Coates and Vanessa Vicars) complemented each other well - despite Vanessa being drunk every performance.

Simon Wallace was really excellent as the King - his amusing inflections causing much merriment (shades of Hugh Laurie as King George, I thought).

Derek Morris played a suitably slimy snail keeper and his pet snail was very good. Played by Jessica Quiney, the shell (made by Mum and Dad) was excellent - complete with slime trail following her about on stage. 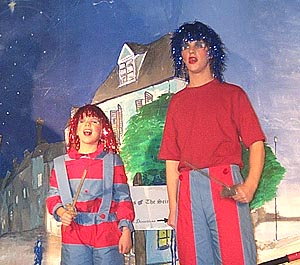 Sue Blackburn was excellent as the dotty Queen Anne and much fun was provided by Matthew Sleath as Plonquer (bit of typecasting there Matt). More comedy from the ubiquitous comedy duo, in this panto called 'Zoot a Lor' and 'Zach Rebleur' well played by Natasha Brown and David Austin and solid performances Val Smith and Jonty Bridger - all ably supported by several village youngsters as Farmhands, Barmaids Dancers and Guards.

There, I said I would only pick out one or two…

The cast take the plaudits but much credit must go to the back stage crew, without whom, none of the cast could set foot on the stage.

In my opinion, one of the more enjoyable panto's of recent years and a credit to the hard work of the director, Morag Underwood. Roll on the Summer production - and let's hope for a similar success.