The Sword In The Stone 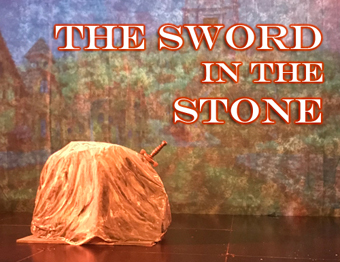 The problem with writing the report on the Bridge Players Christmas Panto each year is that you eventually run out of superlatives!

This year's extravaganza was The Sword in the Stone, a Pantomime by Tina and Rob Burbidge.

The director this year was the indomitable Zoe Dyndor who handled everything that was thrown at her, including a fire alarm right in the middle of the Saturday matinee performance, with a cool head.

The younger members of the cast were given a bigger profile this year, which was good to see, with several of the Villagers having significant speaking parts. The leading lady/man was Jasmine Bailey as Arthur in the traditional thigh-slapping role.

The story is about Arthur who has had a hard life, left with Lord and Lady Ector (Huw Davies and Paul Underwood) when he was a baby. He dreams of being a Knight but is forced to be Squire to the hapless Sir Kay (Joseph Worthy). However, if Arthur pulls a sword from a stone, he could take his rightful place as heir to Camelot, but the dastardly Morgan Le Fay (Beth Gordon) has other ideas.

Sir Ector and Sir Kay are busy training for a jousting competition but Kay looks more cut out to be a jester than a jouster. Luckily this allows Merlin (Dave Bridger) and The Lady of the Lake (Jo Ezzy) to steal Sir Kay's sword so that Arthur has to go looking for a replacement weapon for his Sire.

Searching for a sword, Arthur stumbles across one that has been left in a stone. Watched over by the Voice of Truth (Rachel Marland) Arthur pulls the sword from the stone and unknowingly seals his destiny. However, Mordred (Rosie Gee) is having none of it and quickly grabs the sword from Arthur and claims it for himself. The evil Mordred then sets about making the lives of her subjects a misery.

Incarcerated by Morgan Le Fay (Boo!!! Hiss!!!), Merlin and Lady need to come up with a cunning plan. A plan so cunning you could cut yourself on it! Lady tricks Morgan into freeing them so that they can help out at a banquet in Mordred's honour, and this gives them the perfect opportunity to put their plan into action. Merlin has manufactured a sleeping potion and now all they need to do is to get Morgan to drink it. Lady gets horribly confused as to whether the terrine from Aberdeen or the wok with the flock contains the potion from the ocean and messes it all up. Brave Arthur steps in and makes sure that Morgan Le Fay gets the poison, and after making a toast to Mordred, Morgan falls fast asleep.

With Morgan out of the way, Merlin can now gather everyone together so that the Voice of Truth can tell what she really saw and expose Mordred for the fraud he is. To prove it the sword is placed back in the stone and first Mordred, then Sir Kay try to pull it out. When their attempts fail Arthur is asked if he would like a go. At first he isn't sure, but Merlin takes him to one side and reveals to him that he is the true heir, adopted at birth and taken into Merlin's protection. To cheers of delight Arthur pulls the sword from the stone to take his rightful place as King of Camelot.

And, of course, they all lived happily ever after. Oh no they didn't. Oh yes they did!! 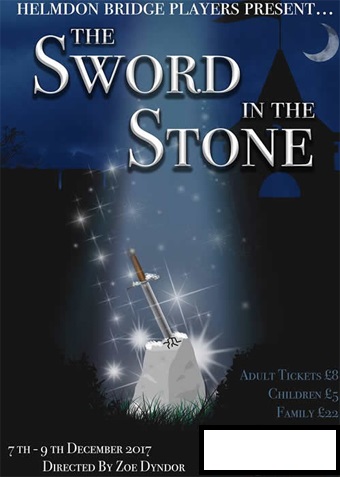 The main cast were supported brilliantly by the Villagers (Emma Corston, Eleanor Yates, Grace Avery, Jessica Newlands, Rebecca Kodra, Sophie Moody and Vicky Hart). Emma gave a very impressive solo singing performance and Grace performed a very effective solo dance as a skeleton to Thriller. She then came on for the classic "Behind you!!" Panto moment, which had all the little ones (and not-so-little ones) in the audience screaming and shouting.

Between acts and scenes, court jesters Jeremiah Joker (Luke Worthy) and Felix the Fool (Josh Newlands) provided funny interjections including such classics as "What "B" do you get milk from?... A Boo B!"

However, the stage players are only one part of the whole production. Behind the scenes the live band consisted of John Plunkett (guitar), Alan Holmes (keyboard), Stephen Sullivan (bass guitar) and Michael Fisher (drums). Bob Duncombe provided the electrickery with lights and sounds assisted by Will Marland and Matt Dunkley. The Stage Manager was John Coatsworth, with props by Dave Dyndor and Val Smith who also shared prompts duty along with Michelle Rimmer. Completing the family effort, Felicity Dyndor was in charge of costumes and Ann Dyndor manned the refreshments as well as acting as the audience tickler. Even further behind the scenes the unseen heroes were Angela Goodall and her team of make-up artists who made everyone look wonderful and believable. Becky Leitelmayer took a year off from acting this year (Boo!!) and provided set artwork. Alistair and Jo Ezzy organised publicity. It is a cast of thousands, and the effort that goes into the Panto over a period of several months is truly staggering.

Whether it's the theatrical talents of the Dyndors, or seeing Paul in drag, or witnessing all the amazing talent that emerges without fail each year, Christmas in Helmdon just wouldn't be the same without the Panto. Thank you the Bridge Players and, for another year, IT'S BEHIND YOU!!