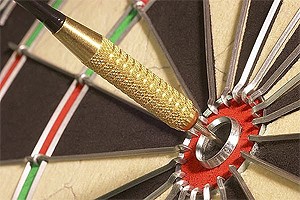 This followed a successful League campaign in which The Bell were narrowly beaten into second place, finishing with the same points as the League Champions but having lost slightly more individual legs.

In addition to those competing on the Finals Night, other regular League players this season were Dan Philips, Stuart Waldron and John Wilson.

It would be nice to get a second team going by next Winter; this would be an ideal way to introduce new or less experienced players to competitive darts. If you are interested, please contact Richard Phillips at The Bell or speak to one of the regular team members for further information.

We can usually be found down at The Bell for practice on Friday nights – come and join us. 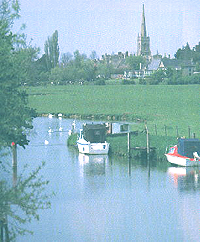 The Bell Inn Bikers, Helmdon's Cycle Club are planning their annual 100 miler. This year the destination is Lechlade, Gloucestershire. Lechlade is a beautiful Cotswold town on the River Thames.

The route is gently undulating, taking us to Lechlade through scenic countryside with some stunning views at times. The journey will be pleasurable and at a pace to suit all and avoids busy roads.

ALL WELCOME! Please also indicate whether you will require camping or will arrange your own accommodation in Lechlade.

If you would like to increase your fitness and stamina for the ride, why not join us on most Sunday mornings at 10.30 outside the Bell Inn.

There will be a meeting on Sunday 23rd May at 7.30pm in the Bell to discuss planning and answer any questions you may have. 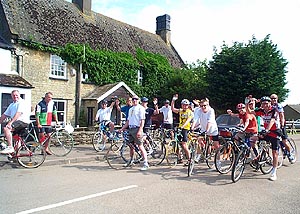 Ready for the off! The cycle club meets at the Bell on Sundays

The Bell Cycle Club meets every Sunday outside The Bell Inn, Helmdon at 10.30am. Anyone is welcome to join. Just meet us at 10.30 this Sunday! Any ability, any age, male or female. We are not racing; just enjoying the countryside and the company. You will meet keen cyclists willing to help, and fun cyclists out for the fresh air and exercise.

Here are a few rides we did in 2001 to give you an idea of what we do. To newer cyclists the distances may appear daunting .. 18 or 19 miles, but actually it is very leisurely and achievable by all.

July 8th 2001
Due to prior commitments there was no ride today.

July 1st 2001
Everyone is tired this week after the hundred miler and only two riders turned up so we decided not to ride today. Hopefully we will return to full strength on July 8th...as ever all are welcome!

17th June 2001
Only two cyclists made it to this weeks ride but it was a good hard ride despite the writers difficulty in breathing due to a cold. (Breathing helps I think when cycling). We set off towards Wappenham and turned across to Syresham (or Syersham as the sign on the way actually says.) We crossed the A43 and circled Turweston Airfield via Westbury. We were a little late for the Gatecrasher event held the previous evening on the Airfield. We stopped for a beer break at Whitfield before continuing the ride through Radstone and back to Helmdon. This ride was just over 20 miles.

10th June 2001
There were nine of us on the ride. We did the Cropredy circuit. The weather was cloudy, cold with a northerly quite strong wind, but not too bad biking weather. No rain thankfully. We left the Bell at about 10:30. Our route took us to: Sulgrave, Culworth, Aston le Walls, Lower Boddington where we turned left along the narrow picturesque lane to just south of Claydon. We then went on to Cropredy, arriving at 12:00 and had an well earned beer in the delightful Red Lion. Leaving at about 12:20 we took the road to Williamscott, Upper Wardington and then Thorpe Mandeville for another enjoyable beer in the Three Conies. After 20 mins we all left and there was some sprinting back to the Bell via Sulgrave, but all arriving by 1:30 having cycled a very enjoyable 26 miles.

3rd June 2001
Four riders met for today's ride on a sunny day with a cold wind blowing. Our route started out towards Weston, on to Moreton Pinkney and Canons Ashby. We rode on, still against the cold wind (it seemed we were always into the wind) towards Preston Capes and Little Preston. Before Maidford we turned for Farthingstone, a beautiful little village. A little further and right on time we were at our rest stop, The Red Lion in Litchborough. We experienced the usual friendly hospitality at the Red Lion before setting out again. Our route home took us to Blakesley, Slapton and on to Wappenham and then up and down the hills back to Helmdon.
This ride was 24.5 miles.

28th May 2001
The Bell cyclists met at 10.30 at the Bell as on a Sunday and headed towards Kings Sutton via Greatworth, Farthinghoe and Charlton. At 11.45am we were pleased to meet with the cyclists from the HYHOs who were on a Tri-Cyclathon. Altogether about 17 cyclists turned for home stopping for frequent refreshment stops in Charlton, Farthinghoe and Greatworth. On our return to the Bell, friends and families of all, enjoyed a great barbecue out in the sun courtesy of the Bell. A great day was had by all ... not sure how many aching legs there were...
The full ride both ways was 20 miles.

27th May 2001
Only four cyclists met at the Bell this Sunday. We had two regulars and two "new starters". It was a dull overcast day with some frequent light, persistent rain. Despite the rain, it was a warm and was still a very good ride. The new starters did very well having no problem keeping the leisurely pace. Today's ride took us out to Wappenham and towards Towcester turning for Slapton before Abthorpe. We rode on to Blakesley and through to Adstone where we took a long loop towards Preston capes and back to Canons Ashby. After Canons Ashby we headed through Moreton Pinkney and then turned for home, stopping at The Crown at Weston for a little liquid refreshment. Just 3 more miles and we were back at The Bell in Helmdon.
Approximate distance for this ride was 18 miles.

20th May 2001
8 riders left the Bell, Helmdon at 10:35 on Sunday morning and headed for Abthorpe via the circuitous route of Syresham, Biddlesden, Chackmore, Stowe School x road, Dadford, Silverstone, Abthorpe (beer in the New Inn - arrived at about 12:15, left at about 1:00). Then we rode through Wappenham and back to the Bell for 1:30. It was a lovely ride, sunshine most of the way, with very little wind. No stragglers and all finished easily (although the pint of beer was most welcome).
Approximate distance for this ride was 25 miles.

13th May 2001
Today's ride saw 7 riders heading on a straight dash to Litchborough. The route was similar to last week's ride taking us to Weston, Moreton Pinkney, Canons Ashby and on to Litchborough, 10 miles from home. After a break at the very traditional Red Lion Pub, we turned for home. The route home took us across to Blakesley and back to Helmdon Via Weston. The weather was excellent making the days ride very enjoyable though as always great exercise.
This week's ride was just over 20 miles. Not approximate any more as I am clocking the rides accurately now...

6th May 2001
This week's ride saw 8 people setting out from The Bell though we did lose one through ill health. I am sure he will be back. The ride was planned to be a little longer as a trainer for a forthcoming charity ride... why not join us...? We headed towards Weston and on to Moreton Pinkney and Canons Ashby. We turned at Canons Ashby and headed for Woodford Halse and then on to Eydon. Just after Eydon we flew down the hill only to find a very long hard upwards climb. We continued (just) on to Culworth and over to Wardington passing Edgecote on the way. We then headed for a long overdue rest break at The Three Conies in Thorpe Mandeville. We then battled on against the wind on the last leg through Sulgrave and back to Helmdon.
Approximate distance for this ride was 25 miles.

29th April 2001
This Sunday's ride saw 7 members cycling out of Helmdon on the Wappenham Road on a fine, sunny day. The group turned off for Syresham before heading on towards Shalstone. After Shalstone the group headed towards Mixbury then turning for Westbury. We cycled on from Westbury to arrive at Whitfield just after midday, a perfect time for the traditional stop for refreshments at the pub. Suitably recovered, the final leg began, taking us across to Radstone and back to Helmdon and the Bell.
Approximate distance of this ride was 20 miles.

22nd April 2001
This Sunday 5 riders met at The Bell at 10.30. The weather was a little cool and windy but kept dry. We headed off through Helmdon to Sulgrave turning then towards Marston St Lawrence. After Marston we passed Thenford and on to Middleton Cheney. After Middleton we turned for Farthinghoe. This was by far the hardest part of this ride. The winding hill to Farthinghoe was very hard work but what satisfaction when we arrived at the top! At Farthinghoe we turned for Greatworth where we stopped off for refreshment at the Inn. Twice at the Inn in Greatworth in three weeks? There must be a reason for this. Join us and ask why? Fully rejuvenated by a pint, or two, of Hooky, we continued our ride heading back to Helmdon. We arrived at The Bell just after 1.00pm.
This weeks ride was approximately 16 miles.

15th April 2001
Again we started at the Bell at 10.30 with a good turn out of ten riders. We headed off through Helmdon and over to Weston. The route then took us to Moreton Pinkney and on through Canons Ashby. We carried on to Adstone and turned for Blakesley continuing on to Abthorpe. At Abthorpe with the time being just 12.00pm and passing the New Inn, we took the chance to take on liquid refreshment and nibbles and have a well earned rest. Fully (or nearly in some cases) recovered we continued our last leg towards Wappenham and then finally arrived back at the Bell at around 13.15.
Approximate distance of this ride was 19 miles