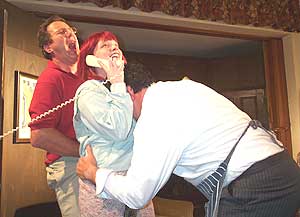 Following on from the success of 'Don't dress for Dinner' a couple of years ago, the Bridge Players, this summer, again essayed a farce. This time an American one, which may be a little unusual but it lacked none of the essential components.

Nicola Dent made her directorial debut with this bold piece and was repaid handsomely by the cast.

The play is set in the country residence of the United States Ambassador to Great Britain. The plot revolves around the fact that the Ambassador, Harry Douglas (played by Paul Underwood) and his wife Lois, (Morag Underwood, looking like someone out of The Lucille Ball show in her glossy copper wig) and their daughter, Debbie (Bryony Coates) each for their own reasons want to have the house to his or herself for the weekend.

They are also struggling to accustom themselves to the constant presence of Perkins, their implacable Butler, never having had live-in staff before. Perkins is played in a very dead pan way by Dave Bridger, more familiar to the theatre going people of Helmdon in his very far from dead pan roles in the pantos. Perkins is reluctantly drawn into the private lives of his employers as each seeks his assurances of absolute discretion as they plot their love affairs.

So ensues a catalogue of mistaken identity, indiscretions and attempted infidelities. Harry Douglas has his eye on the beautiful Marion Murdoch who lives next door, played by Jo Ezzy. Paul Underwood gleefully plays this with delicious louchness. Not for the first time Jo plays the role of the 'other' woman who in an attempt to allay suspicions has to pretend to be the maid. Jo does this with an expression of hauteur and bemusement that her hoped for romp with the ambassador has to take second place to helping the butler in the kitchen. 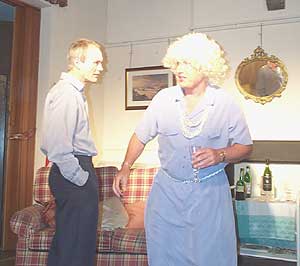 Meanwhile John Plunkett dabbles in a bit of cross dressing as he takes the part of Debbie Douglas's boyfriend disguised as her girlfriend Josephine. This is John's second role with the Bridge Players after his debut in the last pantomime and he perfectly managed to convey the nervousness and distraughtness of a boyfriend hoping not to meet the father, especially one as daunting as an ambassador.

The shenanigans of this duplicitous group of people are soon brought to nothing by the sudden arrival of Captain South of the U.S. Marine Corps (played by Richard Pamment) accompanied by Faye (Michele Rimmer) who, following a bomb threat at the embassy arrive to set up communications at the residence. Faye is the secretary to the ambassador, though why such a powerful and important man should have to endure such a dim-witted and clumsy assistant is beyond me. It does however make good comedy and Faye sweetly tries not to let her feelings show when the ambassador wounds her with his sarcastic retorts. Michele Rimmer handles her part with deftness and delicate humour all the more laudable for a lot of the play she herself is being handled by the butler. All is not lost however for Faye's essential goodness and kindness is repaid when she wins Perkins over and love blossoms.

Meanwhile Captain South is blundering and blustering about securing the house and grounds and completely thwarting everyone's love life. Richard Pamment, looking thrilling in combat trousers, must have had to go into training for this part as apart from delivering his lines on time and funnily, he had to do a lot of yomping around and many prat falls. All is not what it seems with Captain South however as at the end of the play we learn in a clever little twist that the whole bomb threat fiasco was a cunning plan of his and Mrs Douglas. She, having found her out her husband's plans for a fling, berates him long and loud in a wonderful denouement delivered with style and relish by Morag. All the time using this as a diversion for her hoped-for assignation with the marvellous Marine.

It really was a wonderfully entertaining evening, gales of laughter emanated from the Reading Room, which had been transformed in to the gracious surroundings of the ambassadors drawing room, with of course, lots of doors to open and close, by Peter Fisher.

I am sure there are many people in Helmdon who would join me in applauding the skills of all the people involved in this production in bringing it to the stage.