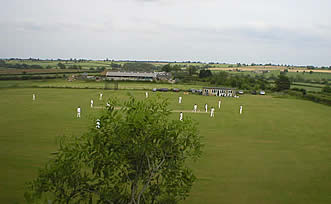 Helmdon Sports and Social Club, which has been in existence since 1969 was formed from the cricket team and the football team (previously quite independent of each other). The cricket team used to play on a field on the far side of the railway line bank at the end of Grange Lane.

In 1969 the Mercury and Herald newspaper in Northampton agreed to sponsor a cricket cup, known as the Mercury and Herald and Helmdon cricket cup. It was a knock-out competition and originally thirty to forty took part but this is now down to eight. In the beginning the competition raised money for the Merry Comrades, which the newspaper sponsored with the aim of raising money for hospitals, but recently the money has gone to the Brackley Cottage Hospital.

The football team has had a sporadic history and has played in various leagues. Whilst the village does not presently have a football team the ground is used by Brackley Athletic FC junior sides during the winter months. It is hoped that the village will be able to resurrect an adult side in the near future and anyone interested should contact a committee member.

The present sports field with its small pavilion up the Wappenham Road is outside the perimeter of the village, about a quarter of a mile on the left-hand side. It was originally rented from the Gulliver family and then bought by the Sports Club with the help of a loan. When the loan was called in, South Northants Council agreed to buy the field and rent it out to the Sports Club.

Helmdon Sports Club has approximately fifty members (many of whom come from outside of the village). The club holds fund raising events throughout the year such as golf days and race nights in an effort to improve the facilities for all groups that use the ground during the year.

In 2017 Helmdon's Cricket team gained promotion from the South Northants Cricket League to Division 2. A daunting prospect lay in wait as it was the highest Division the club had been in since they re-formed in 2003. The particularly wet weather in March and April lead to a stop and start few weeks which included a pre-season Friendly at the cradle of Cricket, Broadhalfpenny Down in Hampshire. It was a game in which, despite defeat, the team showed promise.

When the team were finally able to get up and running, they were defeated early on by Syresham before putting some form together and regularly posting first innings totals of 200+. Runs started to flow from the bats of Lee Marland, Geoff Bridger and George Stubbs, whilst the bowlers, led by Tom Hirst and Tom Williams, were putting in some impressive performances in defense of these totals.

The second half of the season met groundsman Tom Hirst with a different challenge as the square dried out during the heat wave and some serious cracks resembling canyons started to appear. It's fair to say that he met this challenge head on and put in a fantastic shift, not only ensuring games could go ahead but that the surface was safe to bat on. 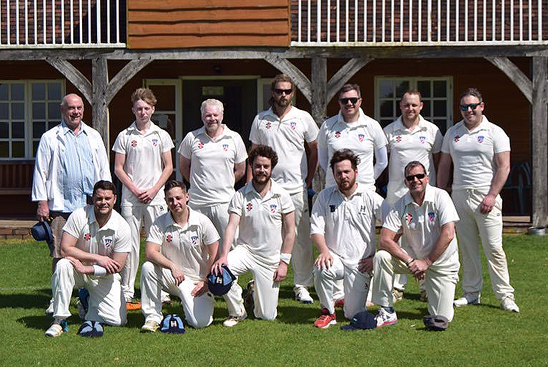 There have been numerous highlights throughout the season; Tom Hirst's maiden half century when chasing a tough total at Byfield in a key point of the season was a moment savoured by all present. Chris Lipson's 5 wickets snatched victory from the jaws of defeat against promotion rivals Marston St. Lawrence. Geoff Bridger blasted 118 not out at Evenley in a massive win and Will Marland, at the age of just 12 years old, scored a solid 24 to put on a 100 run partnership with his father Lee in a successful chase against Wroxton. The change bowlers, Tom Williams and Jonty Bridger were able maintain pressure on opposing batsmen with their swing bowling double act. In total the team scored thirteen half centuries and one century and the bowlers took a hat-full of wickets including four five wicket hauls.

At the start of June there was a comic blip where Helmdon were bowled out for 30 in a match against runners-up Sibford and since then the squad has pulled together and won every single game. A huge amount of credit is due to the whole squad, which includes a good mix of young and not so young. A particular mention must go to the captain Dan Gabbitas, who worked tirelessly to ensure the enjoyment of all involved and has now led the team to successive promotions.

A big thank you is due to all those who have supported the team over the course of the season particularly to Richard at the Fat Landlord who has always offered a warm welcome to the team and the opposition.

On 25th August Helmdon were deservedly confirmed as Division 2 Champions and will play next season in Division 1.

As ever the club is always keen to welcome new members, whether in a playing capacity or otherwise, the team are a social group and they are known around the grounds for having won the league through some high quality cricket, but more importantly for playing the game in the right spirit.

Helmdon Cricket Club are looking for new players, groundsmen, umpires or anyone who wants to get involved in a social, friendly level of cricket in any capacity.

Whether you've played before or not, we would love to welcome you to our Monday Net Practices at Sponne School at 7pm which began on Monday 26 March.

The Sports and Social Club are delighted to announce that we will be running the St Patrick's Day celebrations at the Reading Room on Saturday 24th March. After the great success and support received last year we look forward to seeing you all there again. More info on tickets will follow soon.

Helmdon Cricket Club are welcoming new players and volunteers for the 2017 season. Ages 15 and up. Enthusiasts, umpires, former internationals and everyone between are welcome to join our social and occasionally competitive team. Please join us at our net sessions at Sponne School on Thursday 6th April at 8 pm or call Dan.

'Congratulations' are extended to all who were nominated for the 2015/16 competition on the very high standard & condition of the pitches you prepare for the benefit of all Clubs, Players, Spectators who use the facilities. On behalf of the NFA, I thank you all most sincerely for the voluntary work and time you give to the game we all enjoy.

Yours Sincerely
(signed) A. Pittam
N.F.A. Groundsman of the year Co-ordinator.

Helmdon Cricket Club are in need of players of all abilities and experience, ages 15+.
Net sessions start on Monday 7th March at Sponne school, 8 pm – 9 pm. All kit is provided.
We are also looking for Umpires and people to assist with the ground, beers are provided. Contact me if you are interested in any of the above.