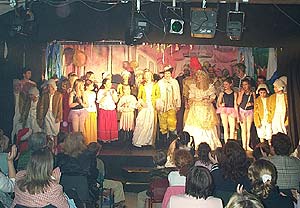 The Sleeping Beauty, a traditional Pantomime by Norman Robbins, was expertly choreographed and directed by Bryony Worthy, her debut as a director! Well-done Bryony for rising to the challenge and taking us all on!

Dave Bridger as the amorphous Dame Ammonia went down a storm cultivating the audience rewriting the script on a nightly basis and entertaining us all with ad-lib so that every performance was a revelation! He was brilliantly cast alongside Neil Smith as the court jester Tickles. The pair had us all thoroughly entertained. They certainly kept Val Smith the prompt on her toes! I am not sure which version I preferred!

The royal couple were Wiggy (Karin Smith) as the dizzy Queen Semolina and Matthew Sleath as King Cedric the long-suffering husband.

Vanessa Vicars as the good Fairy Azuriel played an excellent foil for the dastardly wicked fairy Carabosse (the least said about her the better). I certainly preferred Vanessa's makeup, infinitely more flattering. 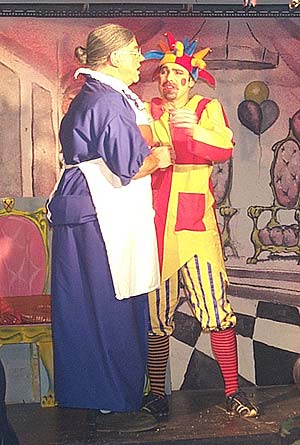 Fusspot played by Richard Pamment finally got his accent sorted to portray the fumbling Chamberlain and once again got the role off to a fine art.

The dancers had choreographed their own dance to perform the insect ballet, which was supported by the lighting and special effects team. The overall effect was stunning and a credit to the girls for all their hard work. Chloe Lovett played her first Bridge Players acting role as Sleeping Beauty and played a beautiful principal girl. Barbara Cox and Felicity Dyndor as Shout and Bawl the two Heralds performed a great double act delivering their very corny lines with aplomb!

Gareth Dean, John Plunkett, Mark Underwood and Jamie Stothard rose to the occasion to play as the band. They created a lively atmosphere and kept us all going when silence prevailed.

Paul Underwood, John Coatsworth and the backstage team once again supported us all with an ancient churchwarden staff, a few branches and one or two interesting seating arrangements. The team also supplied the obligatory bangs and crashes in almost the right places. Phil Bridger, Mark Underwood and Sam Blackwell demonstrated their skills in sound effects and lighting to bring the whole performance to life.

All much fun and a super group of people to work with. A great production!

As a special added extra this year we have an interview with a cast member...

Stories can be written and photographs can be taken but what about the inside view of being in a Bridge Players production? This year, as a special treat, cast member Becky Hardiman gives us the inside gossip...

Q. What was the pantomime this year?

A. The Sleeping Beauty.

Q. Roughly how many people attended the performances?

Q. How many people were in the pantomime?

Q. When did practice start?

The first rehearsal that I can remember attending was on the 12th November but I know that the main cast started long before that!

Q. Were there any accidents in rehearsals?

I cant actually think of any accidents but the finale song was originally going to be 'Dancing in the street' but when we started to sing it it was so bad that it made someone cry! Understandably, it was then changed to 'Rock around the clock'!

Q. What was the storyline?

A. In the kingdom of Entertania a baby girl was born to the king and queen. They then threw a massive christening and invited all the fairy folk, at least that's what they thought. On the big day the fairies all arrive and begin to give their blessings to the baby Aurora. Just before Azuriel, the queen of the fairies, gives her blessing her sister, Carabosse (booo!), bursts in and is most upset that she wasn't invited to the christening. So Carabosse, being the evil fairy she is, curses baby Aurora so that when she is 16 she will prick her finger on a spinning wheel and DIE! Luckily Azuriel, although she cannot stop Carabosse's spell altogether, manages to make it so that Aurora wont die but only fall asleep and can be awaken by a prince's kiss. Sixteen years pass and its Aurora's birthday. All the spinning wheel's have been destroyed but this isn't enough to stop evil Carabosse carrying out her plan. She sneaks into the castle, in disguise, bringing a spinning wheel with her and, alas, Aurora pricks her finger. Though Carabosse had been sneaky and had made it so that it must be her true love's kiss that wakes her. All is not lost, earlier that day Prince Valiant had arrived in the royal gardens (with a little help from Azuriel) and Aurora had fallen in love. So with a little help from Tickles' time machine and Azuriel's magic the team go off on a quest to wake up Sleeping Beauty! (Don't worry it's a happy ending!).

Q. Did anything go wrong?

A. Of course! A pantomime wouldn't be a pantomime without mistakes! I can think of one in particular. On one of the nights the curtains opened at the beginning of act two, when most of the chorus are on stage but the people who were supposed to be doing the lighting were still out on the school playing field. So we all had to stand there with the ultra violet lights shining on us (they were on all the time) and lots of our costumes had white on them so we were glowing in the dark until the lighting people got back!

Q. Did you enjoy it?

Q. Would you participate next year?

Thanks, Becky, for the insider's view. We hope to do the same for next year's Panto - oh no we don't - oh yes we do!!