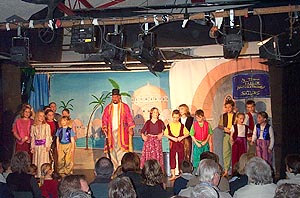 Opening scene with Sinbad and the Chorus

Pantomime, as we know it today, is a form of entertainment all on its own, derived from ballet, opera, music hall, and the realms of folklore and fairy tale - and elements of all these are still to be found in it. This strange mixture has created a splendid topsy-turvy world where men are women, women are men, where the present is embraced within the past, where people are hit but not hurt, where authority is constantly flouted, where everything is open to ridicule - including the Pantomime itself at times - and where, above all, magic abounds and dreams invariably come true. Sinbad is no exception...

The talent, the tantrums, the excitement, the terror, and most of all the great fun of the Panto, has heralded the start of the Christmas season in Helmdon.

Brian Austin's directorial debut upheld the high standards of the Bridge Players with a Panto that had all the sparkle that we have come to love.

Being director can be a lonely job, and hard decisions have to be taken. Who but a brave man would cast Morag Underwood as a dressmaker's dummy with only four words to say? You wouldn't think much could be done with such a role, but Morag did it with panache. 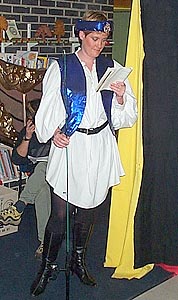 Sinbad (Nicola Dent) checking on
where we were in the script.

The Panto, Sinbad the Sailor, is a poignant tale of love transcending barriers of class, parental disapproval and poverty.

Sinbad is a young man helping his widowed mother run her dairy with milk from their beloved dromedary Drusilla. Curiously, Drusilla's humps shrank and expanded throughout the evening. This may have been to do with the discrepancy in height between the dedicated actors inside her (David Jenkins and Jamie Garner).

Sinbad, thigh slappingly and gleefully played by Nicola Dent, meets and falls in love with Princess Yasmin, played by Ruth Underwood. The princess's father, the Caliph, (Sue Blackburn) has arranged for her to marry an elderly Indian Prince but of course in the end, true love triumphs.

It isn't possible to give everyone who appeared the full credit they deserve but Paul Stothard deserves a special mention. His first Panto with the Bridge Players and he jumps right into the deep end and takes on the part of the Dame. He played her with a subtlety and refinement seldom associated with the Bridge Players. The chemistry of his relationship with Dave Bridger, who played the love interest, was haunting. The audience really cared what happened to them. 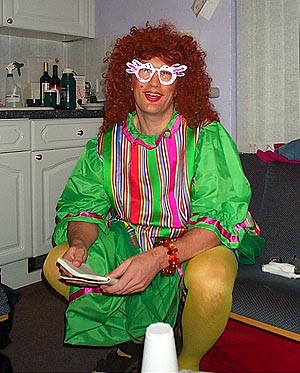 The chorus, the youngest of whom are only 9 years old, proved themselves to be real troupers, doing four performances in three days with enthusiasm, dedication and gusto. Their monkey dance was beautifully choreographed and executed on a striking set. It fizzed with fun and energy.

The set was painted single handedly by Peter Fisher and it was truly beautiful. It really conjured up a middle eastern flavour and set the scene perfectly.

The wardrobe mistresses this year were Louise Stothard and Morag Underwood; music was provided by Lizzy Woolley and last year's sensation on drums, Neil Buckley.

A huge team of behind-the-scenes people doing lighting and props ensured the smooth running of another great success for The Helmdon Bridge Players.