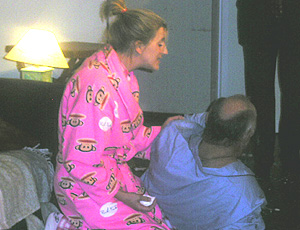 Intrigue and mystery in School Ties.

The Bridge Players offered two short plays for our entertainment this summer, 'School Ties' and A Colliers Tuesday Tea.

School Ties is about the unexpected meeting after many years, of two old school 'friends'.

Stella and her husband, Derek, (Claire Brotherton and Dave Bridger) have put their house on the market and are expecting viewers. When Amy and Ray turn up, (Becky Leitelmeyer and Paul Stothard) Derek is dismayed that they appear to be settling down together as he, uninhibited by the fact he was married, had a quite a thing for Amy five years previously. This provides an under current of irritation between Stella and Derek despite the fact that the other prospective purchaser is Stella's old school chum Romaine (Briony Worthy) with whom she enjoyed a 'close' relationship. All of this is viewed with adolescent exasperation by Hannah, Derek and Stella's daughter, played with insouciance by Fliss Dyndor.

Then there is the question of the necklace. Stella owns a valuable necklace amongst other less desirable items of jewelry but word has got out and there is a jewel thief working in the area, hotly pursued by the police...but which of the house guests is the thief and which the police? Confusions arise of course and in the end no one really gets what they hoped for due to misplaced loyalties and old school ties.

Becky Leitelmeyer made her debut in a Bridger Players summer production with this play and was very good in her role as under cover cop who might also have been grappling with unfulfilled hopes regarding Derek. Paul Stothard as Ray, enjoyed the undisguised hostility between his character and Derek. Derek and Stella, long married and weary with the business of selling their house and quite probably with each other maintained a veneer of politeness while dealing with their rather gushing but duplicitous guest, Briony Worthy who was unashamedly stirring things up.

It was an unusual and entertaining play, executed as we have come to expect, with crispness and style by the Bridge Players.

The amusing fare that followed was tantalisingly hinted at as the set was erected during the interval. The audience, sipping their wine and discussing School Ties were intrigued as an enormous kitchen table, seemingly hastily constructed by the props people, was carried onto centre stage. It was already laid up for a high tea in what promised to be kitchen sink, grit and grime drama.

Then director Paul Underwood came on stage and delivered a charmingly hesitant and hilarious cameo as a vicar introducing a fund raising entertainment. 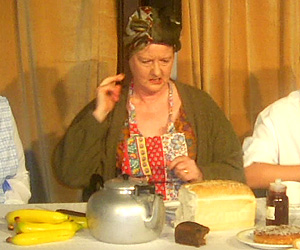 Comedy and mayhem in A Collier's Tuesday Tea.

As the actors came on stage it appeared that all was not what it seemed. A delightful 12 minutes of split second timing, gags and slap stick ensued with the legs falling off the table in rapid succession leaving the cast having to hold the table up while they acted.

This send up of a D.H. Lawrence pit head drama, complete with son who wants to avoid mining as a career and go to university, was quite the funniest thing the Bridge Players have ever done. I know this because everyone who saw it said so! The mother of the family convincingly played by who I at first thought was Les Dawson but was in fact Morag Underwood, heroically soldiers on trying to do the best for all the family, Dad was Paul Stothard, just in from the pit and tolerating no nonsense from sensitive son Fraser Turner. The daughter was played by Zoe Dyndor who was able to indulge in the most appalling table manners, spitting crumbs all over the table while talking with her mouth full. Grandad was Val Smith who kept up a low muttering and incomprehensible commentary on the whole affair, Michele Rimmer was the gossipy next door neighbour killing time having a cuppa and all of these literally played a supporting role to Neil Smith as the daughter's boyfriend when he pops in and finding no chair, sits on the legless table. This chaotic scene is further disrupted when John Plunkett and Dave Bridger burst in with the tragic news of death and destruction at the pit. Every member of the cast played their part in a play that demanded the finest of timing and concentration to make it the comic success that it was.

Back stage people were also, as ever, important in the success of these plays, John Coatsworth and Peter Fisher worked on the set and the famous table and Phil Bridger did sound and lighting, miss cueing with the best of them for the second play.

A memorable and much talked about evening of entertainment.