A modern take on Charles Dickens's classic tale of a young orphan who is able to triumph over many obstacles.

A young boy in Hitler's army finds out his mother is hiding a Jewish girl in their home.

Consummate con man Roy Courtnay has set his sights on his latest mark: the recently widowed Betty McLeish, worth millions. But this time, what should have been a simple swindle escalates into a cat-and-mouse game with the ultimate stakes.

With their partners away serving in Afghanistan, a group of women on the home front form a choir and quickly find themselves at the center of a media sensation and global movement.

As a regiment assembles to wage war deep in enemy territory, two soldiers are assigned to race against time and deliver a message that will stop 1,600 men from walking straight into a deadly trap.

A Chinese family discovers their grandmother has only a short while left to live and decide to keep her in the dark, staging an impromptu wedding to see grandma one last time.

When an alien with amazing powers crash-lands near Mossy Bottom Farm, Shaun the Sheep goes on a mission to shepherd the intergalactic visitor home before a sinister organization can capture her.

83 year old Edie believes that it is never too late - packing an old camping bag, leaving her life behind and embarking on an adventure she never got to have - climbing the imposing Mount Suilven in Scotland.

The continuing story of the Crawley family, wealthy owners of a large estate in the English countryside in the early twentieth century.

A film director reflects on the choices he's made as past and present come crashing down around him.

A detective investigates the death of a patriarch of an eccentric, combative family

Christine "Lady Bird" MacPherson is a high school senior from the "wrong side of the tracks." She longs for adventure, sophistication, and opportunity, but finds none of that in her Sacramento Catholic high school. LADY BIRD follows the title character's senior year in high school, including her first romance, her participation in the school play, and most importantly, her applying for college.

In 1613 William Shakespeare Retired. He Still Had One Last Story To Tell - His Own. Starring Kenneth Branagh and Judi Dench it is a film full of interest and mischief.

A struggling musician realizes he's the only person on Earth who can remember The Beatles after waking up in an alternate timeline where they never existed..

A new Stephen Merchant film based on a true story where a former wrestler and his family make a living performing at small venues around the country while his kids dream of joining World Wrestling Entertainment.

In 2001, Afghanistan is under the control of the Taliban. When her father is captured, a determined young girl disguises herself as a boy in order to provide for her family.

Ten fisherman from Cornwall are signed by Universal Records and achieve a top ten hit with their debut album of Sea Shanties.

A musician helps a young singer find fame, even as age and alcoholism send his own career into a downward spiral.

A man who is suffering a mid-life crisis finds new meaning in his life as part of an all-male, middle-aged, amateur synchronised swimming team.

A father and his thirteen year-old daughter are living an ideal existence in a vast urban park in Portland, Oregon, when a small mistake derails their lives forever.

Following the death of their friend, two girls in their late twenties embark on a road trip to spread his ashes. Seph and Alex take turns driving. Dan is in the glove compartment, in tupperware, decreasing in volume as the trip progresses.

Agnes Varda, one of the leading lights of France's honored French New Wave cinema era, and professional photographer and muralist, J.R., collaborate on a special art project. Together, they take photographs of people around the country and create special colossal mural pictures of individuals, communities and places they want to honour and celebrate. Along the way, the old cinematic veteran and the young artistic idealist enjoy an odd friendship as they chat and explore their views on the world.

Based on the true story of Forrest Tucker (Robert Redford), tracing his history…. from an audacious escape from San Quentin at the age of 70, to an unprecedented string of heists that confounded authorities and enchanted the public.

Set in 1950's London, Reynolds Woodcock is a renowned dressmaker whose fastidious life is disrupted by a young, strong-willed woman, Alma, who becomes his muse and lover.

Aspiring musician Miguel, confronted with his family's ancestral ban on music, enters the Land of the Dead to find his great-great-grandfather, a legendary singer.

In 1980s Italy, a romance blossoms between a seventeen year-old student and the older man hired as his father's research assistant..

At a top secret research facility in the 1960s, a lonely janitor forms a unique relationship with an amphibious creature that is being held in captivity

A cover-up that spanned four U.S. Presidents, pushed the country's first female newspaper publisher and a hard-driving editor to join an unprecedented battle between the press and the government. 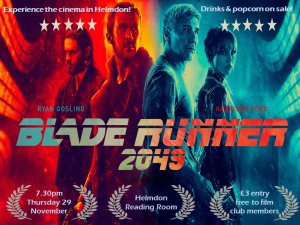 Film Club Extra - Open to everyone

We'll be showing a series of three films on a Thursday night during the winter months, starting with 'Blade Runner 2049' on 29 November 2018.

Relax with some popcorn and a beer/glass of wine and be surprised by the quality of the surround sound in Helmdon's Reading Room!

Right on your doorstep and at the bargain price of £3, or free to film club members.
Please do join us and bring your friends along too. Hope to see you there!
Emma Gray