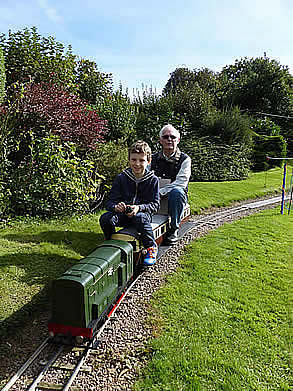 Who is enjoying it more?

It is with the greatest regret that we have decided to stop running trains for the public so sadly our open afternoons which we have been running for the last 20 years will come to and end. We were thinking of stopping anyway in a couple of years or so as we're not getting any younger and the virus has simply brought things forward.

We do want to thank all our loyal supporters, many of whom come from Helmdon, who have encouraged us over the years by their presence chiefly, but also by their financial support which as well as helping to keep the trains running have donated a total of over £10,000 to the charity Send a Cow.

The model engineering club will continue and trains will be run but it will very much be a club activity for members only and for invited guests. When that will be able to happen is anyone's guess at the moment.

Tucked away in the garden of John and Jenni Roberts in Pimlico is the Pimlico Light Railway - a 5" gauge ground level ride on railway. Originally designed and built by John about 25 years ago PLR was established officially as a club in 2006 although we had been running for a few years before that.

Whilst PLR is located in their private garden they have encouraged local people to come and enjoy a train ride for many years since John became the local Benefice Rector.

When John retired he found he had more time on his hands and set up an Engineering Club at the Primary School in Syresham. Here the older children were taught engineering skills and this continued for 3 years. In the meantime John wanted to further encourage the knowledge of engineering and so PLR as a club was established with membership open to young and old although junior members - Primary School age - do have to join with a parent or guardian.

Our official 10th anniversary was celebrated with a picnic at Pimlico and a visit to the Great Central Railway at Loughborough which was thoroughly enjoyed by all that attended.

There is now an adult membership of 27, 3 members are 16+ and in Education, there are 7 Junior members below the age of 16 (who are waiting to achieve their 16th birthday when they can drive for the public!) and 10 Associate Members. Half of the takings from the rides and the refreshments we send to our chosen charity, www.sendacow.org the total amount in 2017 coming to £714.28

Special mention was made of the prize awarded to Jack Colby, who was supported and sponsored by Club members, in a national competition run by Engineering in Miniature magazine. Jack is now the proud owner of a Myford Super 7 lathe and tooling.

In 2018 we are running on the 4th Sunday in the months of April to September inclusive from 3 – 5 p.m. The cost of rides is £2 for three rides and a single ride is £1. Refreshments – a key part of the afternoon's experience, will be available.

The Light Railway is staffed entirely by the club members who are the drivers and man the station and track as well as set up and pack away before and after every event. Members' wives and mothers provide the refreshments.

In the closed season there is the maintenance to attend to of both the track and equipment. John has also encouraged the members to become more involved and some of us meet on Wednesdays to restore or build engines and rolling stock with some of the Junior members also having extra engineering sessions with John in the evenings.

To contact John Roberts re Pimlico Light Railway please use the following form.