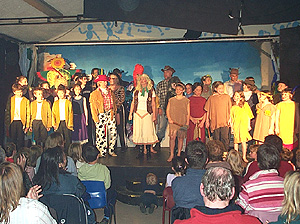 For many years the residents of Helmdon have been the lucky and grateful beneficiaries of magnificent entertainment in the form of the Bridge Players' Christmas Panto, and this year was no exception.

Old Mother Hubbard (Paul Stothard) is down on her luck, clean out of bones and in desperate need of some good luvin'! The local bailiffs (Jess Quiney and Kate Blackburn) are knocking at her door, and life is looking pretty grim. The along comes the Good Fairy (every Panto has one), ably played by Jo Fitzroy-Ezzy, who grants one wish to Old Mother Hubbard and her kind children Polly (Val Smith) and Hughie (Neil Smith). Mother Hubbard decides the thing she would like most of all is to see her long lost brother, Oswald This presents quite a challenge to the Good Fairy, for not even a search on Google reveals his whereabouts, and Sue Lidgley, Richard Phillips and Danny Moody are no help either! Luckily the Good Fairy gets assistance from special guest "Mr Magic" (AKA Rev Will Adams) and in a Countdown moment they discover brother Oswald is prospecting for gold in them there 'ills in "AIAERCM"! 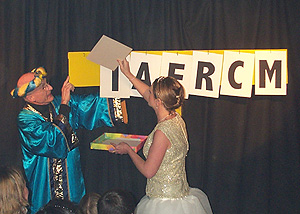 I hope the Good Fairy's "spells" are better than her "spelling"!

Luckily the Good Fairy's magic wand is better at spelling than she is and it whisks the Hubbards, along with pet dog Dandy (Fraser Turner), over the pond to the wild, wild west of "AMERICA".

The first person to greet the new arrivals is dreamy cowboy Tex Laramie (Barbara Cox) who immediately becomes the focus of Polly's romantic attentions! Unfortunately for Old Mother Hubbard love is in the air and she can't shake off the dusty, old Tumbleweed (Dave Bridger) who has decided that Old Mother Hubbard is the finest lassie he's seen for many a year!

Then, enter stage left, the evil, rotten, most odious baddie Matt Vinyl (Richard Pamment) and his acidic sidekicks Jez and Belle (Claire Brotherton and Eleanor Shepherd). Matt Vinyl does not take kindly to them there foreigners pokin' around in his town, especially since he bumped off Oswald years before to get his evil hands on Oswald's ranch. If Old Mother Hubbard found this out there could be trouble ahead!

When Hughie Hubbard is seduced by "working gal" Miss Lulabelle (Morag Underwood) his loose tongue gets him in to trouble and he reveals that they are there to find Uncle Oswald, or his lost fortunes. If only he had given in to the advances of little Indian girl, Little Deer (Sue Blackburn) maybe he could have stayed out of trouble! Getting wind of the situation Matt Vinyl hatches a plot to get rid of the visitors once and for all. He cons the local Indians in to thinking that the Hubbards are there to build a new railroad through their territory, and they immediately go on the war path. 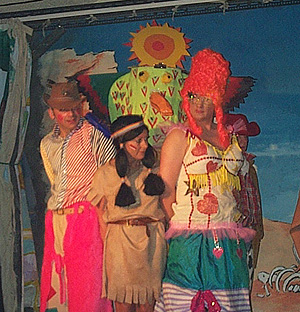 Is this the end of the trail for Old Mother Hubbard?

Mother Hubbard, Hughie and Polly are captured by the Indians and tied up to a totem pole and it looks like Old Mother Hubbard might go to meet her maker minus scalp. Mad Mat Vinyl looks on knowing that soon all his troubles will be gone - BUT WAIT - just as the Indian medicine man is about to wield the ceremonial scalping knife he realises that Old Mother Hubbard is none other than his long lost sister! Yes, in a twist so convoluted you could only get away with it in Panto, the Indian medicine man turns out to be Oswald! Chief Thunder Cloud (Jonty Bridger) explains that in fact Matt Vinyl had failed to kill Oswald and he was found by the Indians in the desert, delirious with thirst and with complete "magnesia", so he had no idea who he was. The Indians had taken him in and adopted him and only when Oswald laid eyes on his long-lost sister did his memory return - and with it the incriminating recollections of what Matt Vinyl had done.

Major Day (Hector Sharp) was called upon to arrest Vinyl and thus good prevailed over evil. Oh no it didn't! Oh yes it did!

This Bridge Players performance highlighted the depth of talent in the group, some old stagers and some newcomers, but all highly professional. The sets and backdrops were superb and the whole production was a triumph. This Panto will be remembered for the fact that Dave Bridger managed to get through the whole thing without wearing a dress (almost!).