Helmdon's War Memorial - The Men Behind The Names 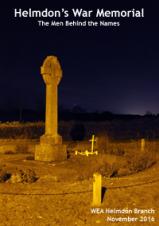 2014 was the 100th anniversary of the First World War and in November 2014 a War Memorial project was published on the website to find out more about the history behind the names of the servicemen on the Helmdon War Memorial. The group who gathered the information were Judy Cairns, Audrey Forgham, Cec Harrold, Danny Moody and Ross Vicars; Charles Binns restored many of the old photographs and postcards.

Helmdon's War Memorial - The Men Behind The Names was first published in 2014 and then refreshed in November 2016 with newly-researched and discovered information.

This article is presented as a full-colour, 103 page, PDF document to view or download. (Copies are held by the church and the school).