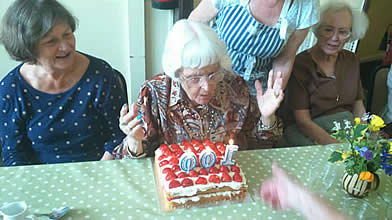 On Tuesday 16 June Tuesday Lunches celebrated Gladys Pomfret's 100thbirthday. She lived in Helmdon for many years before going to New Zealand to be with her family, and on her return to England some time ago she went to live in Brackley and happily continued to be a regular attender of Tuesday Lunches.

After the usual excellent main meal, accompanied by celebration wine, Gladys blew out the candles on her birthday cake, a delicious strawberry and cream gateau, which was then served to the assembled company. New leader Angela Goodall recalled the changes that had happened over the century since Gladys was born and wished her well in the future. Gladys was then presented with a bouquet of flowers and a digital photo frame. In her thanks she recalled her earliest memories and proved to us all how sharp one can still be when one reaches the grand old age of 100. She finished by commenting that some of her happiest years had been when she had lived in Helmdon.

All the best of good wishes to you, Gladys, and may we see you at Tuesday Lunches for a long time to come.

At the Easter meeting of the Tuesday Lunches, Wiggy Smith stood down as Leader. She was heartily thanked for all her commitment and hard work over many years and presented with flowers.

Angela Goodall and Judith Elkington are taking over the running of this popular monthly lunch from the May meeting. The list for the following month's lunch is put up in the Reading Room directly after the lunch which has just been held, and taken down on the Tuesday prior to the following month's lunch date, but you are asked to get in touch with Judith if you are cancelling or have forgotten to put your name on the list.

It was said last year, and it must be said again, the 2014 Christmas lunch was the highlight of the year of the monthly Tuesday lunches and a truly splendid meal was enjoyed by all. The Helpers did us proud. A sherry welcome, a starter, followed by turkey with vegetables and all the trimmings accompanied by wine, then Christmas pudding or trifle with coffee and Thornton's chocolates to end the meal, was an occasion it would be difficult to better.

At the start of the proceedings the Helmdon Clangers entertained with a rendition of Christmas carols, and after the meal the Key Stage 2 Helmdon School choir sang some of the carols they had performed with other schools in Brackley a week or so before. It was a delight to hear all the words so clearly sung by an expertly trained group of children. Afterwards the Tuesday Lunches regulars presented the helpers with gifts to acknowledge the hard work that had gone in over the year to provide such delicious fare. Lastly, to end off the afternoon, Ann Harman accompanied a selection of carols. (See photos below)

The Christmas Lunch - Highlight Of The Year - posted 21 December 2013

Tuesday, 17 December was the day of the 2013 Christmas Lunch, highlight of the Reading Room Tuesday Lunches Year!

We were welcomed with glasses of sherry, and then followed the traditional Roast Turkey, roast potatoes, roast parsnips, carrots, brussels sprouts with all the trimmings. Christmas Pudding and Luxury Lemon Trifle followed. All was cooked to perfection and thoroughly enjoyed by forty six diners.

The Reading Room was splendidly decorated for Christmas. The Helpers were:

Thank you to everyone who helped to make the lunch a great success. It was a splendid event, enjoyed by all.

Those Tuesday lunches in the Reading Room, which Lyndsey Glassett established and ran so well for several years, are to be revived, by a committee. We shall do most things as she did them, but of course we have to earn the right to say we shall do them as well. So far we are a group of eight, besides four who will help on the Tuesdays to set, serve and clear up. Among the eight, the one person with a special responsibility is Audrey Beattie, who will take the South Northants. basic hygiene course in September to provide us with the necessary certificate under Health and Safety laws. For the present, I'll be the person to receive complaints (and other comments). We are operating under the auspices of the PCC, and protected by its insurance policy. Our first lunch will be on October 19th, at one o'clock; and we'll keep to third Tuesdays even near Christmas. The other dates for our first six months will therefore be November 16th, December 21st, January 18th, February 15th, March 15th. The list to sign to book your seat on October 19th and your choices is in the Reading Room and will stay up until October 7th. Working as a group, we need a bit more planning time than Lyndsey took, to share the work and fun fairly between us. The first lunch menu is: Stuffed Marrow (Mock Duck?), or Chicken Casserole, with Vegetables; Rice Pudding with Jam, or Apple Crumble. We want to plan our menus well ahead and do it soon after the first lunch, so please let me have any suggestions very soon after that day.

We are starting at the price of £3.50 and expect that to cover all expenses including room hire and electricity. Lyndsey worked for a fund for equipment but her aims were achieved long since, and we haven't in mind any need to raise capital. However, it was suggested to me that people enjoyed having a raffle at the lunch. We shan't undertake one for our first occasion, but do you want a raffle? If, so please make that plain at the October lunch. We are relying on the people who used to enjoy these lunches to tell their friends who used to come from other places, and we confidently invite older newcomers to the village to make these lunches a way of getting to know their community.

Lunches are normally on the 3rd Tuesday of the month.

Luncheon Club has been suspended due to the resignation of the Organiser and main cook, Lyndsey Glassett. It was with regret that participants heard that Lyndsey had given up this work, which has been much apreciated by many villagers over the years.

Here are a series of photos from the day...

The annual barbecue of the Helmdon Luncheon Club was held in glorious summer sunshine on 14 August at Leeden Tye.

Unfortunately, it became so hot that, as there was not enough shade in the garden, a few members had to sit inside.

Thirty five people enjoyed marinated chicken, homemade burgers and sausages, with salad, garlic bread and jacket potatoes followed by fresh fruit salad and ice cream. Once again, Lyndsey would like to thank all those whose unstinting support helped to make it a very successful day.

Below are some more pictures from the barbecue... 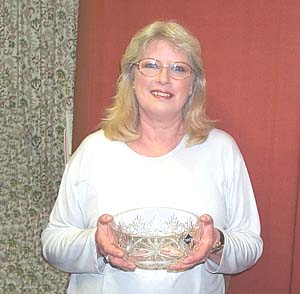 Dedicated volunteer Lyndsey won the 2001 award for her sterling work with Helmdon Luncheon Club and other numerous good deeds around the village.

Post Editor Richard Howarth and South Northants Council Chairman Tony Wilkinson presented her with a glass rose bowl and £30 worth of book tokens at an awards ceremony on Monday evening.

She said: "It was a lovely surprise. It was very unexpected. The secret of voluntary work is to do something that you enjoy.

"Lyndsey set up the luncheon club in 1998 after serving lunches for the ladies at the Baptist Chapel in the village for a year.

When it was first launched, 13 people attended. The club met this Tuesday when 39 people sat down for lunch.

Other good deeds include running the village's "birthday board", taking in stray dogs and helping out friends and neighbours in need.

Her daughter, Rachel Willson, put Lyndsey forward for the award.

She said: "She does so much for others. She is always running around doing things for other people. All of the time she is constantly thinking of others."

Other finalists for the award included Linda Dollochin of Kings Sutton; Chris Brown of Kettering; John Giddings of Pottersbury; and Sally Allcroft, Sue Palmer and Rosemary Thompson of Middleton Cheyney.

The award is now in its third year and is run by The Post in conjunction with South Northamptonshire Council.

Post Editor Richard Howarth said: "Once again the South Northants Volunteer of the Year awards have brought unsung heroes into the limelight.

"This award is all about people who give up their time to help others and our finalists are shining examples.

"The standard has been extremely high and well done to everyone who entered, our finalist and of course, our deserved winner, Lyndsey Leeden Glassett.

Sandra Barnes, leader of the SNC, said "A lot of people give up their time and do not think they are very special, so the recognition we give to people who do help others is important." 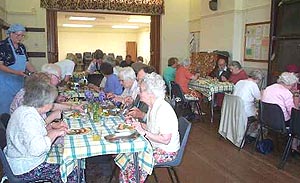 Members sit down to lunch in the Reading Room.

With an interest in creating good food in a social setting, Lyndsey Glassett attended a Basic Hygiene Course run by the South Northamptonshire District Council. Discussing the possibility with some of the older members of the village, she found interest for a monthly lunch in the Reading Room. With support on the practicalities from her husband, Terry, and offers of hands-on assistance from Janet Hall, Gillian Reid and Val Ayres,she was encouraged to start in September 1998, and welcomed thirteen members of the village to the first meal of chicken, carrots, peas, cauliflower and potatoes, followed by apple pie and custard.

By November, a committee had been formed and Lyndsey applied for a lottery grant for £1,400 for kitchen equipment and necessary crockery and cutlery, that until then had been borrowed. What great excitement to be awarded, in April 1999, the full amount asked for, and what fun was had spending it!

The club now regularly caters for up to forty villagers, some of whom come from Wappenham and Lois Weedon, and it operates a home delivery service, within the village, to those who have difficulty in coming to the Reading Room. It offers a choice of two main meals for a cost of £2.75. Janet and Gillian have been involved from the start and shortly afterwards were joined by Zena, Lorraine, Pauline and Kate, without whom the club would not function. They are a loyal and dedicated team, and Lynsdsey is extremely grateful for their continued support. Meals need to be booked beforehand on the list in the Reading Room. The menu is displayed there, too. If you know of anyone who would like to join the group or would like a meal delivered to their Helmdon home, then please contact us.