It Could Be Any One Of Us 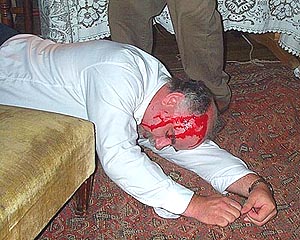 The play overview perfectly describes the characters and setting for Alan Aykbourn's "It could be any one of us", a spoof of a typical Christie whodunit - a big house, a dysfunctional family group and a perfect motive for murder. This was the offering from the Bridge Players for the Summer of 2003.

Mortimer Chalke is a frustrated composer whose one claim to fame was winning an obscure "Young Composer of the Year" award many years previously. He lives his disillusioned life in the country, sharing his large house with his unbalanced brother Brinton (an artist who has not produced anything in public in 30 years) and his sister Jocelyn (a writer who has never been published). Jocelyn's friend Norris (a down at heel gumshoe who has never solved a crime) and her daughter Ami (the epitome of teenage rebellion and angst) complete the household.

The plot is set when Mortimer spitefully announces that he means to leave the family home to a lady called Wendy Winwood, his one and only music pupil that he last saw twenty years previously. He adds that he has invited Wendy to stay to discuss the arrangements and thus provides his embittered siblings with the perfect opportunity for murder. 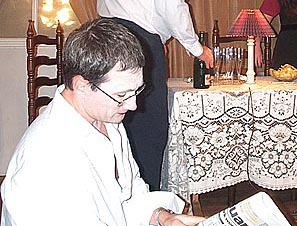 Although full of classic Ayckbourn wit and style, somehow the plays falls short of being a typical spoof but also lacks the character development and excitement of a real thriller. However, in their usual enthusiastic style, Helmdon's Bridge Players tackled the play with verve and some originality. The overuse of makeup to give the characters a gothic appearance was quite clever and added to the sense that they really were an odd bunch.

The play seemed a little slow at the start but gathered considerable pace as it went on. Note to Helmdon audiences - you are allowed to laugh at comedies!

Dave Bridger gave his usual polished and convincing performance as the spiteful Mortimer Chalke. No one could have been too disappointed that Mortimer was the one that met his end - smashed over the head with his one and only trophy. Paul Stothard gave a well thought out portrayal of the odd Brinton, varying from a parody of Private Pike to someone who perhaps has deeper and more malevolent leanings. Morag Underwood was also very convincing as the long-suffering Jocelyn. Bryony Coates gave a very good portrayal of the moody Ami - I'm sure much of her body language was familiar to many.

Perhaps the most difficult role was that of Norris - the one time big shot insurance investigator who had turned into an incompetent detective, tackled with commendable enthusiasm by Derek Morris. His North Eastern accent lent itself to the role - his inflections adding to the comedic value of many of his lines.

Jo Fitzroy-Ezzy appeared halfway through the play as Wendy the diffident house-guest and provided some very funny moments - not least when nervously singing about sizzling sausages while Norris roams the house looking for intruders.

The set and the presentation of the play were very well thought out and lighting was, as usual, excellent. The Reading Room is well suited to the presentation of such plays - and presenting the play in the round also provides more opportunity for both players and audience.

All in all another success for the Bridge Players - long may they continue. The village is lucky to have them.