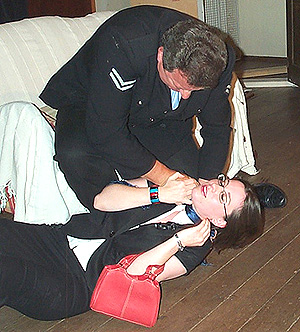 Clayton needs to shut Vivien up.

What starts out as an innocent enough interview with between a celebrity journalist and the wife of a famous film star soon unravels into a pacey and bloody thriller. This year's production, a brave departure from the Bridge Players usual comedy/farce, was extremely well directed by first time director Jo Fitzroy-Ezzy and had the audience on the edge of their seats as the story unfolded leaving a trail of dead bodies in its wake. The brilliant set was built and designed by Peter Fisher, creating an intimate and homely setting for the play. Phil Bridger as usual did a super job of the lighting and sound effects which were timed and executed (Mmmm poor use of word) with great skill.

It was great to welcome some fresh new talent this year in the shape of Zoë Dyndor (Vivien Norwood) portraying a double crossing "journalist" who is really the right hand woman to Geraldine Crozier (Morag Underwood) an ice cold, ruthless and focused diamond and drug smuggler, who strikes you as a woman used to getting her own way! Supporting roles of Jane Mercer (Bryony Worthy) the private secretary and Robert's cousin, Dorothy Medway (Michele Rimmer) helped to move the play along and gave a little light relief from the plot which spiralled down to reveal the depths to which human beings will go to get what they want.

The real victims in the play turn out to be the celebrity actor couple Robert and Stella Drury (Paul Underwood and Nicola Dent) who are subjected to relentless psychological trauma by their unwelcome and uninvited house guests of first Crozier and then by Burford and Clayton (Dave Bridger and John Plunkett) who have kidnapped their son Mike. Paul and Nicola's performances of desperate, heartbroken parents is excellent and the audience is quickly drawn into the highly charged emotions of the couple who will do anything (including trafficking drugs and diamonds) to get their beloved son returned safely to them.

Burford and Clayton give an extremely believable portrayal of two policeman but their calm and professional demeanour is soon eroded as the kidnapping plot of the Drury's child and the bungled take over of Crozier's plan collapses. Burford and Clayton's true colours are quickly seen when they resort to murdering both Crozier and Norwood to make their dream a reality, in a most unpleasant and bloody manner!! 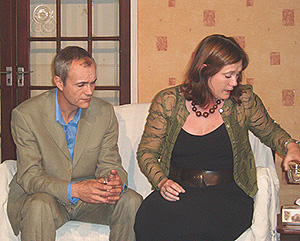 The Bridge players were thrilled to have a special guest appearance from Ewan Doodlupur who played the dashing American Phillip Henderson. He bore an amazing likeness to Paul Underwood so was a natural choice to play the body double for Robert Drury, having been tricked by Burford into thinking he had been invited to the Drury's home to discuss a new film role, when in fact Burford was hoping to bribe him into taking the drugs to New York in exchange for the diamonds under V.I.P. cover. An astonished audience jumped with surprise at his untimely end at the hands of Clayton's gun, not least the front row who were splattered with more than a drop of realistic looking blood. The Chairman is hoping any profits will not be lost to the cost of dry cleaning.

In the end of course there was a happy ending, the plot was thwarted, Burford and Clayton were handed over to the real Police and Mike was returned unharmed.

The Drurys no doubt will recover to carry on enjoying their celebrity lifestyle but first I think they need a new lounge carpet!!