Brief History of The Reading Room 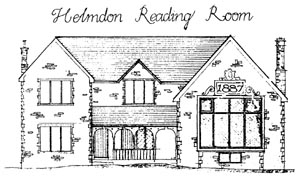 The Reading Room is a Victorian building given to the village by Charles Fairbrother in 1887. This is commemorated by an inscription on the top right of the building.

Originally it was a place where men could go as an alternative to the pub and they were provided with newspapers and books. It was not until the time of the First World War (1914 - 1918) that women began to use it.

Today the Reading Room has the function of a village hall, being the place where the Parish Council meets and many village activities take place.

For more information about other buildings in the village, please look at Helmdon History and Village Trail. (This provides links to articles on this website and other websites including www.helmdonhistory.com)

Detailed History of The Reading Room

The Reading Room was given to the village by Charles Fairbrother in 1887 in memory of his parents and family who had long lived in Helmdon. At that date a "reading room" was the common device to provide men with an alternative place for their leisure to the pub, and women were not expected to use it. In Helmdon they did so only for an annual dance - and therefore their cloakroom and toilet had to be provided in a bedroom of the caretaker's cottage, because the only toilet was for men. At first newspapers and weeklies were donated although at a later time they were purchased by the Reading Room committee.

A small yearly subscription was levied, which did not finish until about 1930. Until the First World War the premises were open every day of the year except for Sundays, Christmas Day, Good Friday and unofficially, the Thursday of Banbury Fair.

As well as reducing their numbers, the men's habit of daily use of the Reading Room was broken by the First World War and, in 1921, Helmdon Women's Institute was founded. The women, once allowed regular meetings in the Room, were the chief force behind improvements, especially in the kitchen and toilets, from the 1920s until now.

The building included accommodation for a caretaker, who received also free fuel, and in return was to clean the room and toilet, and supervise it. This usually made a full-time responsibility for a woman whose husband worked for their living elsewhere. Since the 1970s the cottage been let and the rent is a very important part of the Reading Room's income. Income is also derived from rent from the users of the hall, although in the past some societies such as the British Legion were not charged.

Under the trust deed the Reading Room was originally under the jurisdiction of the rector and churchwardens, and it was not until the 1970s that the trust was transferred to the Parish Council and a managing committee from representatives of all village organisations (whether they used it or not), as required under charity law.

At various times the Reading Room has hosted a wide variety of classes, Helmdon's choral society (between the wars), the Mothers' Union, the Brownies, a Youth Club, and a health clinic attended by nurses from Brackley. Badminton used to be played there regularly until the ceiling was lowered.

In 2002, after more than a hundred years at the Reading Room, the Working Men's Club (later called the Men's Club) joined up with the Sports Club, and continue to play billiards at the sports pavilion in Wappenham Road.