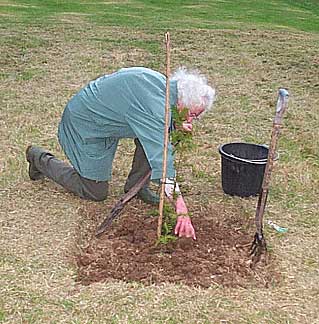 The tree photographed being planted is one of some thousands of yews grown from cuttings believed to be at least 2000 years old, and provided by the Conservation Foundation as rooted cuttings in 1999. The enthusiast behind the project was the Foundation's president David Bellamy.

Helmdon's tree is a cutting from a yew in Enton in Surrey, and was given us in October 1999 as a small thing in a small pot, too young to go into rough ground. It grew on, repotted once, near my water butt, until April 27th 2004, when I planted it in a cleared spot in the churchyard extension.

In its present site the millennium yew provides for the future what our own old yew does near the church, for the past. They are both male trees. The churchyard has a female yew, young but mature, near the cremation burial area, where its seedlings shoot very often.

Our old yew was estimated some years before, by the Conservation Foundation to be about 1700 years old, as their certificate in the church proclaims. This figure is accepted by most people as appropriate to their ideas of the Druids and their sacred places. My own reaction to that position is that 300 AD is far too late to have anything to do with Druids: a yew a few inches high could hardly have attracted the reverence of Druids some 250 years after the Romans suppressed Druidism in the very process of conquest. The Romans were tolerant of cults of local gods, numerous here throughout the Roman period as in the heartlands of the Roman empire; but Druidism was put down in Britain to clinch the conquest as it had been earlier in Gaul, because it fomented anti-imperial revolt. 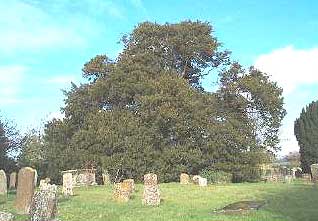 A few years ago an enthusiast of a different opinion altogether approached me after morning service. This was Stephen Dennis of Hereford. I argued the case for the estimate of 1700 years against his much later date, for an hour or so, and then capitulated to his much more rigorous method of calculation. The general foundation of this included his study of a few mature yews (at most only a few hundred years old) for whose beginnings there is documentary evidence. There is no such evidence for Helmdon's tree, and there is not likely to be any for any tree over a thousand years old. The rate of growth of our own yew he calculated by the annual rings, which he could count in the litany desk made in 1913 from a bough, which came down in 1907. There would have had to be more than twice as many rings to the inch if the tree had taken 1700 years to grow. Then I watched him measure the girth of the trunk. He pointed out that it is necessary to measure above any bulges made by root growth and below the bulges developed to support the boughs. He had measured Helmdon's tree nine years before, and he said that in the interval the girth had increased by two and a half inches - a substantial growth. If this were the effect of nine years out of 1700 (some 0.5% of its life) such a growth should make a tree over 40 feet round. Ours is not that big.

I don't know the details of Stephen Dennis's calculation, but he produced an amendment to his earlier estimate, from the year 1313 to 1309. The closeness of these dates is impressive - or incredible; but they are a thousand years short of the other estimate.

What inclines me to take these fourteenth-century dates as authoritative is that the tree was planted very near the north-east comer of the chancel. The chancel can be dated by its fine Decorated features to the decade which includes the date on the Campiun window, 1313. That a craftsman at his work should be named in stained glass as early as 1313 is strong evidence of his importance to the work done in his time, and makes it easy to believe that the chancel may have been achieved about 1313. The planting of a yew about that time, either as a seedling or as a young sapling like the one I've just planted in the extension, is a very credible gesture of celebration and confidence. Yew was a choice easy to understand: it is one of the longest-lived native evergreens, to be a symbol of eternity; and it was provision for long-bows - Helmdon was not to know how soon the long-bow would be outdated by the musket.

I should be glad if any reader with more knowledge still can add anything to the debate.