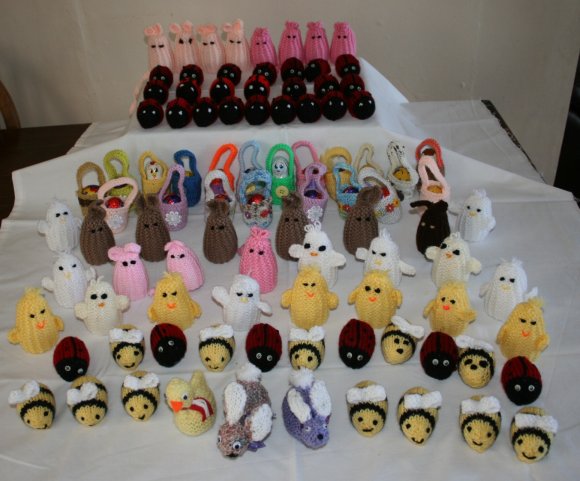 Stitchers Easter Knit - posted 18/03/19
Helmdon Stitchers have once again excelled themselves with their Easter Knit. A selection of cream egg filled novelties have been passed on to raise much needed funds for Katharine House Hospice.

A group of Helmdon ladies have been meeting once a month for the last 20 years to sit and sew, knit and stitch, crochet and chatter. They were initially brought together to make the wonderful tapestry kneelers for Helmdon Church and when over 100 were finished, the ladies decided to keep on meeting at a member's home and have done so ever since.

Over the years the twelve or so ladies have worked on a variety of skills from patchwork to quilting, cross stitch and embroidery, knitting and of course chatting.

As well as creating for pleasure the ladies have made items for charity. They regularly sent boxes to the Red Cross and knitted over 1,000 Easter chickens for Katherine House Hospice as well as Christmas puddings and stockings, which have been sold in the Hospice Shops. They have also knitted warm hats for soldiers in Afghanistan for the charity Support Our Soldiers and beanie hats and blankets for a charity based in Ghana. They have lost count of the number of stripey jumpers knitted for children in need around the world.

As an offshoot of the group, a Craft Day has been held in Helmdon Church every two years since 2002, which has been enjoyed by many and again donations have been given to charities such as MIND and the Air Ambulance.

We all look forward to our monthly get-togethers and although we would like to include more members, sadly there is no space around the table! 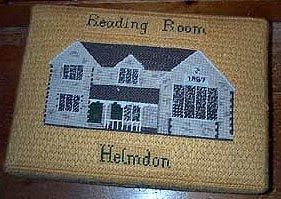 When Jenny Overson came to Helmdon in the early 80s she left behind in her previous parish a large and flourishing kneeler scheme which she had launched and led. On coming to Helmdon Church she missed the colour and comfort of stitched kneelers. There were some dull flat leatherette pads which provided neither colour nor comfort and did not fill every pew ... it is politic to keep quiet when you are new and she said nothing for a while. Then one day in course of conversation with Ann Harman, the subject of kneelers came up. It transpired that Ann had long cherished the idea of new kneelers but not quite known how to go about it. Jenny arrived with both experience and enthusiasm. Ann was in office as a church warden at the time and it is always good to have allies in high places. So both thought it was time to pursue the idea. Jenny spoke to the then vicar, John Roberts. His immediate response was "You'll have to find the funding", but overall he was supportive of the scheme. Jenny was very confident that both the money and the people would be forthcoming, and the first fund raising coffee morning was in Jenny's garden which was then at 6, Church Street.

And with that the group was on its way. You only have to look at the kneelers in the church to see what was achieved. Jenny was responsible for getting the materials and equipment and she came with some designs but the design options soon expanded. The group chose the gold background colour to match the predominant colour in the window glass of the chancel. The "In Memoriam" scheme was popular and brought in funding and ideas and the scheme became representative of village life, village organisations and village people, as well as making due reference to some of the signs and symbols of the Church year. The scheme drew in several dozen stitchers including many who either didn't know or didn't believe (or both) that they could contribute by stitching at all. But the work was well achieved, some stitching just one piece and others repeatedly adding to the collection. And there were new and extra elements like the cushions and runners at the altar and the Wedding Kneeler for example.

During the twenty five years or so of the scheme of course some people have come and gone. By 1994 Jenny had ceased being leader having gone on to launch a long-term, large scale, mega-bucks Anglo-American project for Sulgrave manor which involved well over 500 volunteer stitchers and filled the next fifteen years of her life. Annette and Ron Guppy were Jenny's neighbours by now and Annette became largely responsible for the health and welfare of the scheme. She arrived with time, good craft and organizational skills, and contributed significantly to new designs. Annette and Ron together made the early photographic record you can see in the albums today. She also ran a scheme in conjunction with the children at Helmdon School to make the Noah's Ark series.

In 1997 the Guppys moved to France and the Stitchers were briefly itinerant. Then Connie Humphrey stepped forward to offer Manor Farm as a venue. Connie had been a quiet but steady supporter of the scheme and very much wanted it to continue. And so the tea and cake and the stitching carried on in another new home.

When Connie moved to Brackley the home base became Margaret Reardon's house, and that is where the Group meets now. By this time Sheila Oakey, a long term member of the group, had come right to the fore and she took control of the materials and designs. Shelia was another of our very skilled and prolific stitchers and she guided the scheme to its conclusions. She master minded the seat cushions and kneelers in the choir stalls which made another stand-alone project. Sheila is remembered particularly today as an "In Memoriam" piece made by the Helmdon Stitchers Group in her memory.

Today there are ten to twelve members – it varies a bit – of the Helmdon Stitchers group, which meets regularly each month. This group has evolved from the original group. Several members of the Stitchers were not part of the Kneelers group and most people who stitched kneelers are not part of the present group, so it is now a rather different creature altogether, changed in character since the kneelers were finished, and it is bound to change again as people continue to come and go. The current members have an interest in crafts of various kinds and can work on individual pieces but the group identity these days is largely defined by the work done for charity, essentially Katherine house Hospice. There are two main bursts of activity, one coming up to Easter and the second ahead of Christmas, when seasonal items are made to be sold in various outlets with all proceeds to Katherine House. For example, Christmas puddings and Father Christmases figure at Christmas and for Easter there will be chicks to sit over mini Easter eggs or perhaps rabbits. Such community groups always have more than a practical purpose, there is a social function, a therapy even, some would say, so long may the Helmdon Stitchers continue to meet.

Adapted from a short history of the Helmdon Kneelers and Stitchers given by Jenny Overson at a village Praise and Prayer service in Helmdon Church, November 2014. The service included a display of members' work which was much admired.