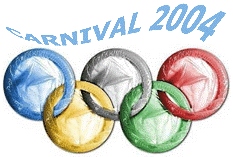 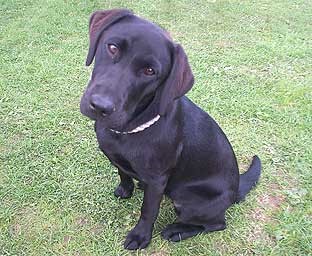 The theme this year was "The Olympics" - very appropriate as the Carnival took place on the very day that the phenomenally successful Team GB returned from the Olympic Games in Athens.

Indeed there was a good spirit of competition on the sports field as the Carnival included, for the first time, a dog show.

The weekend kicked off with a lively Saturday night party, which included a disco and bouncy castle for the kids from 7:00 p.m. followed by the group Rokface performing live from 9:00 p.m..

On Sunday 29th it was the return, return, return of the Porterhouse Jazz Six who had everyone tapping their fingers and toes despite the rather inclement weather. A bar and barbecue helped keep everyone in Carnival mood.

By bank holiday Monday everyone was ready for the main event and in the morning there was activity all round the village with people getting stalls ready and making last minute preparations and adjustments. Unfortunately there was no procession this year as rocketing insurance costs had forced organisers to abandon tradition for the first time in the carnival's history. Insurance cover can be as high as £250 per float per hour for public liability!

Apart from the dog show, this year's attractions included such favourites as cake stalls, coconut shy, tombola, archery and skittles.

Returning for the second year was Nick Mead and his popular WWII tank - a great hit with the children.

The country theme was maintained with sheep shearing and a display of vintage tractors along with a demonstration of ploughing the old fashioned way with single-furrow vintage ploughs.

Unfortunately, although the day was mainly dry and sunny, the strong wind meant that the skydivers and model helicopter display had to be cancelled at the last moment. We hope to see them back again next year. 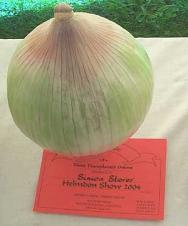 A popular event is the Helmdon Produce & Craft Show, which runs alongside the Carnival. Classes are always hotly contested and there is never a shortage of entries. The undisputed vegetable king of Helmdon is now Simon Storer and no one could match his vegetables for size and quality, although Rex Jessett, Tony Wilson and Fred Bennett gave him some good competition. Simon swept away with many prizes including firsts in "3 Transplanted Onions", "A Cucumber" and "Best Vegetable Plot".

The standard of arts and crafts on display, particularly in the youth section, was exceptional and all entrants deserve congratulations for such a good show.

The Carnival Committee was formed in 1982 as a joint venture between the Sports Club and the Reading Room. Both organisations have been, and continue to be, worthy beneficiaries of the Carnival proceeds and the remainder is given out to various village and local good causes.

There were three presentations of money from the proceeds of the Helmdon Carnival, amounting to the excellent sum of £3,600, at a meeting held in the Reading Room on Thursday, December 16th.

David Brookhouse, chairman of the Brackley Cottage Hospital Trust, who attended with fellow board member John Liddicot, received a cheque for £1,200. He thanked the Carnival for their continuing support and up-dated the audience on the recent meeting in Brackley. The plan is to re-locate the hospital on the Springfields site, with a Care Home as partner. The Trust is hopeful that it is a viable proposition and that it will go forward as planned.

Bill England, Chairman of the Reading Room, was very appreciative of a cheque for £1,200. He detailed works which had been done over the last year, such as up-dating the electrical system, and the repair of the porch roof, but emphasised that there was a great deal more to be done, and assured the Carnival committee that the money received would be used wisely in the coming year.

Paul Stothard received a cheque for £1,200 on behalf of the Sports Club. Although he is primarily involved with cricket, he said that the football teams were flourishing. There were currently plans to develop the pavilion and the cheque received was very welcome.

Then David Brookhouse expressed the thoughts of all those present. He thanked the Carnival committee and all the helpers and participants who make the Carnival such a great success each year.