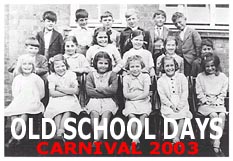 I wonder if the organisers of the very first Carnival in 1982 knew what they had started?!

2003 saw Helmdon Carnival celebrate its 21st birthday with a full weekend of merriment and entertainment.

After last year's Jubilee extravaganza, the Carnival Committee had their hands full living up to their reputation and, true to form, they managed it with bells on!

Thousands of villagers and visitors enjoyed the 3 day event, which took place on the sports field, Wappenham Road from 23rd - 25th August.

The weekend started with the return, by popular demand, of Beatles revival band "Accrington Stanley". A warm summer evening helped people get in to party mood.

On Sunday 24th there was a jazz afternoon accompanied by bar and barbecue to satisfy all appetites. Even though the event finished at 4:00 p.m. there were still people enjoying the warm evening, drink and food at 8:00 p.m.!

There was a buzz around the village on Monday morning with everyone making final preparations for their participation in the big day. The Carnival procession started out from the School at 1:30 p.m. and paraded down Station Road and past the war memorial up Wappenham Road. The Grand Parade was led by the Banbury Air Training Corps Band followed by floats and vintage tractors.

The Carnival was due to be opened by Alice Hearne, Helmdon's very own centenarian, but unfortunately Alice broke her collar bone and was unable to attend. Standing in very ably was the much younger Harold Seckington. 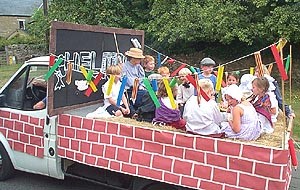 The theme this year was "Old School Days" which lent itself to some very good floats. Totally underestimated was the HYHOs float - "Truants" but in the end first prize went to the very deserving float from the pupils and staff at Helmdon Primary School.

Floats take a lot to organise and construct so everyone that made the effort deserves to be congratulated.

Attractions this year included traditional favourites such as Morris Men from the Royal Oak Morris Group in Eydon and a marching display from the Banbury Air Training Corps Band, blended with some new things such as Nick Mead's WWII tank, which certainly caught the eye at the sports field, and an impressive display of remote control helicopter flying.

There was also a large number of stalls and games such as inflatables, refreshments, bric-a-brac, cakes, produce, coconut shy and tombola. Mark Oakey displayed a fine range of carved wooden garden ornaments and furniture. 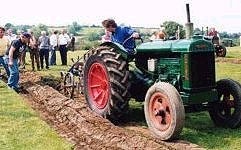 One very popular feature of the Carnival is the display of vintage tractors with working demonstrations of vintage ploughing. The Helmdon Carnival is just one venue on an annual circuit for vintage tractor enthusiasts and it always attracts a large group. Organiser Tony Wilson said this year was very well attended and showed how much the old country ways are still valued. Also back on the agricultural menu was sheep shearing after a two-year absence because of Foot & Mouth.

The incredibly hot summer in 2003 meant that Helmdon's gardeners had a real challenge to produce quality produce for the Craft & Produce show. However, there were some excellent entries and Simon Storer is now firmly established on the Helmdon vegetable scene carrying off several first prizes.

The money raised from Carnival 2003 will be dished out to local good causes including Brackley Cottage Hospital. For the second year running the Carnival Committee are proposing to plough some money back so that next year's event can be even more successful. The new marquee that was purchased with funds from Carnival 2002 was certainly an improvement on the old tent which had really seen better days!

The main objective of the carnival is to provide entertainment and fun for the people of Helmdon. However, if money can be raised for good causes in the process then so much the better!

The 2003 cheque presentations and carnival AGM took place on Tuesday 28th October in the Reading Room.

Steve Valentine opened the meeting and was pleased to distribute the money to the various worthy groups.

Bill England accepted a cheque on behalf of the Reading Room Committee for £900. He commented on the success of this year's carnival and thanked the committee. He updated everyone on the situation regarding the Reading Room. A recent survey had shown that approximately £15,000 worth of work needed to take place during the next 2 years, so all donations were greatly received.

Pete Burns accepted a cheque on behalf of the Sports Club Committee for £900. He commented on the fact that the Sports Club had been close to closure in the past but was enjoying a revival due to lots of youngsters being involved in all team sports, and that it was now thriving once again. The new lease is near to completion so facilities will be improved in the coming months. He added that the money will be well spent, possibly on a set of cricket nets and thanked the carnival committee for their efforts.

David Brookhouse accepted a cheque for £500 on behalf of The Brackley Cottage Hospital along with a fellow board member John Liddicote. He thanked the Carnival committee for their support this year and over the past few years. He said what a difficult year it had been for the hospital, and that they were still fighting to keep it open and were looking at alternative places to relocate to.

Debbie Mahon gratefully accepted a cheque for £100 on behalf of the Acorns Playgroup. The OFSTED Inspection had been a success again this year, but had highlighted new equipment that would need to be purchased.

Louise Stothard came forward on behalf of CKERS, Helmdon's youth group, to receive a cheque for £100. She explained that the group had around 20-25 members aged between 8 and 15 and that all donations went towards organising outings.