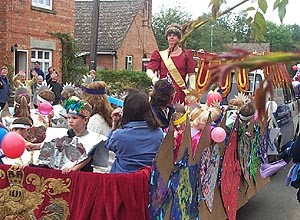 The Acorns float was a right royal display

After months of eager anticipation the 2002 Helmdon Carnival weekend was an unparalleled success raising well over £5,000 for local charities and causes.

Up to 3,000 villagers and visitors congregated on the sports field on Wappenham Road over the August bank holiday weekend for what turned out to be one of the best supported Carnivals ever.

The massive weekend kicked off with a live music event on Saturday 24th August with Beatles revival band "Accrington Stanley" headlining. They had everyone rocking all night with their 60s renditions and certainly got everyone in festival mood for the weekend. They were admirably backed up by local band The Chippies.

On Sunday 25th it was the turn of the Porterhouse Six jazz band, a band that has become a firm favourite in the village. They entertained everyone in the afternoon and there was bar and barbecue to satisfy all appetites.

A slightly overcast bank holiday Monday heralded the arrival of the main event. The Carnival procession started out from the School at 1:30 p.m. and paraded down Station Road and past the war memorial up Wappenham Road. The Grand Parade was led by the Banbury Air Training Corps Band followed by seven floats, vintage tractors, a coach and Morris Men.

This was the 20th Helmdon Carnival and the theme was, of course, the Jubilee. The floats were bedecked with flags and banners and the village enjoyed a right royal occasion. Best Float went to "Britannia" by Gary Turner, Paul Whitehous and other friends in Cross Lane, whilst the Acorns picked up the Best Junior Float. Everyone put a lot of effort in to the floats this year and all deserve congratulations.

At the sports field there were all manner of attractions. The Morris Men were from the Royal Oak Morris Group in Eydon and lent a very traditional atmosphere to proceedings. Main ring attractions included a marching display from the Air Training Corps Band as well as the ever popular tug-o-war with 6 teams competing for the Ross Vicars Trophy. This year the winners were Eydon who proved that technique and finesse will win every time against brute force and ignorance! One of the highlights of the day was the aerobatics display from flying legend Denny Dobson. He spun, tumbled and weaved his 300 hp Extra 300 display plane back and forth over the Carnival as everyone gazed skyward. The plane pulls up to 10g, so rather him than me! Denny Dobson is a huge name in European air display circles, performing more than 100 shows each year, so it was a real coup for the Carnival committee to get him. 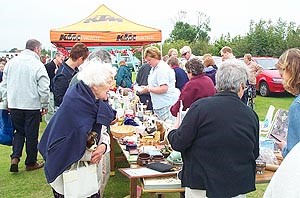 Carnival goers could browse all sorts of stalls

There was also a large number of stalls and games such as inflatables, refreshments, bric-a-brac, cakes, produce, archery, coconut shy, tombola, fire engine and beat-the-goalie.

Across the road there was a vintage ploughing demonstration but that was the only "live" agricultural exhibit, since there were no animals again at this year's Carnival.

The Craft & Produce show was hotly contested again with a huge variety of artwork, flowers and vegetables on display. The well established vegetable growers carried off the majority of prizes but a few newbies are beginning to make an impression too and will help ensure great competition for years to come.

Once all the proceeds from the Carnival have been collected in there will be a cheque presentation ceremony. Brackley Cottage Hospital and the Helmdon Reading Room are expected to be amongst the beneficiaries.

Every year the money raised at the Helmdon Carnival is distributed to various worthy local causes and charities.

The 2002 cheque presentations took place on Wednesday 6th November in the Reading Rooms.

Simon Oakley, the Carnival Committee Chairman, had the honour of handing out the money.

£700 went to the Helmdon Sports Club and representative Michael Ayres says the money will be used for continued improvements to the sports pavilion on the Wappenham Road sports ground.

Another £700 went to the Reading Room, received on behalf of the ManagementCommittee by Bill England. The money will go towards the refurbishment of the Reading Room toilet facilities to allow for disabled access as well as starting a fund for repairs to the flat roof on the extension.

The Helmdon Rainbows received £100. Representative Marie Wray said "The Rainbows is a new organisation in the village, we have only been going a few weeks. So far we have relied on everyone's generosity (and enthusiasm) to get going, so this money is very welcome".

£100 went to the Friends Of Helmdon School and Sandra Wroe, receiving the cheque on behalf of the Friends says that they will buy a new PA system to replace the old one that had reached the end of its life.

A final cheque for £100 went to the Helmdon Acorns, the village's pre-school group which is expanding from three to four mornings per week to cope with demand! Acorns representative, Bee Aczel, said the money will be used to cover the additional costs and buy some new wall hangings to brighten up the Reading Room during Acorns sessions.

The total money donated by this year's Carnival Committee was £2,400. A sum of money is also being ploughed back this year to purchase much needed new marquees, which the Carnival Committee hope to be able to hire out to other organisations throughout the year. The remainder of the cash raised by Carnival 2002 will be used as a start up fund for 2003.