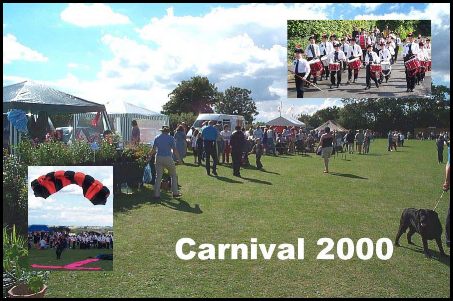 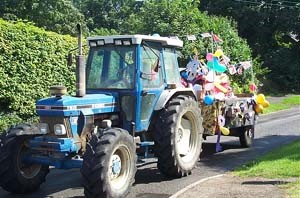 The floats paraded down Church Street

The Helmdon Carnival celebrated its "18th birthday" on Bank holiday Monday. Despite a shower or two, the weather turned sunny, and the crowds came and enjoyed themselves.

The Army Cadet Band led the parade. The prize for the best float was won by the Acorns, with the Bridge Players second and the HYHO's third.

The main attractions included a parachute display, line dancing, a sheep shearing demonstration, archery, the Benetton Formula 1 car and vintage ploughing. The stalls were manned by village organisations and there were amusements to delight the children.

The 62 classes attracted many entrants to the Produce and Craft Show and a large crowd enjoyed the displays in the marquee.

This annual event continues to be a major draw and each year and the wealth of talent increases. The tremendous variety of ideas and designs drew many favourable comments from the judges and public alike. Apart from the usual vegetables, this year produced many alternative classes, ranging from ceramics and jewellery to flapjacks and foliage arrangements, with a variety of artistic drawing and paintings, in charcoal, watercolours, pencil and oil.

In the children's section, the youngsters excelled with their masks, collages, pictures and models, whilst one youngster thrashed all the adults with a marvellous example of a home-made birthday card! 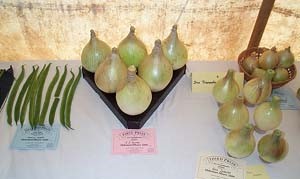 The winner of the six transplanted onions class.

Jack Ayres won the trophy for the vegetable section, with Doreen England collecting the cup for the most points in the home produce section . The Pete Lidgley Memorial cup was presented to Mr and Mrs Hardiman and Fiona Storer, joint winners of the best vegetable plot, judged in July. The 8 and under junior cup went to Stephanie Ashby and the 7 and under to Amelia Stubbs. The trophy presented by Bloomers Florists was won by Ann Wilson.

We are generously supported by our commercial sponsors and are very grateful for their continued interest. This year we thank Julie Potter, D A Coleman, Chris Gartside, Liz Humphrey, David Mumford, Monogram Company, Texprep Printers and Tesco. We also have numerous individual sponsors and we gratefully acknowledge their support.

What The Papers Said

Parachutists dropped in at Helmdon Carnival on Bank Holiday Monday, to help raise funds for charity.

The event started with a procession of floats and the St John Ambulance band. They paraded through the village and to the Sports Club ground where other attractions were held.

The sun shone for most of the day and spectators were entertained by the Hinton Airfield parachute display, line dancing, and sheep shearing, vintage ploughing and other demonstrations.

People tried their hand at various events including tug of war, tossing the sheaf, coconut shy, raffles, welly-wanging, archery and guess the weight of the Formula One car.

Children were entertained with bouncy castles, a fairground ride, hook a duck and other games. Ice cream, candyfloss, barbecue food and refreshments were available.

Simon Oakley, on the carnival committee, said "We hope to raise £4000 which will be given to the Brackley Cottage Hospital, Helmdon Reading Room, the Sports Club and another village charity."

This was the 18th year that the Helmdon Carnival had taken place. More than 1,000 people usually attend and it was hoped that amount was at least equalled this year.

A Blues Night held in the village on Saturday raised nearly £500 for the charities.

The event was again a great success and as well as the usual attractions associated with carnivals, there was also the chance to see something a little bit different with a display from a sky diving display team.

Not only that but there was also line dancing, sheep shearing and fairground rides to keep visitors entertained.

There were art and crafts stalls for visitors to look around and lots of silly games for everyone to get involved in.

Simon Oakley, spokesperson for Helmdon Carnival, said: "It was very successful. It always seems to be very popular."

The proceeds of the 2000 carnival were presented to the beneficiaries in a ceremony held in the Reading Room on Tuesday 5th December 2000.