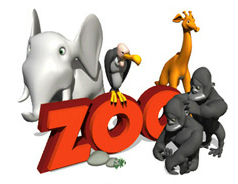 The first depicted the anonymity of the Tube system. All the cast were excellent in their own way as bit by bit they revealed their own life's hopes and frustrations. Paul Underwood was particularly good portraying Simon - a life long bachelor with nerdish qualities. Neil Smith revealed the sad and lonely depressed side of life which we all knew would finish for him at Victoria tube station. Bryony Worthy played Tina, an eternal optimistic job seeker who continually analysed her interview technique. Zoe Dyndor played Faith. This character had a lot of psychological issues and complete disdain of those trying to help her. Mark Lovett who played George did a good job portraying a successful business man frustrated by constant personal calls. Jose (John Plunket) whose portrayal of a Spanish student had to be heard to be believed.

The second play was hilarious. It was about a manager of a zoo who problem by problem gradually loses control until eventually, when Raj the tiger escaped, he loses it completely. Matt Sleath held this together with a brilliant performance as the zoo manager. He was ably assisted by the rest of the cast as voices off. The surprise was Morag Underwood appearing as a penguin - one of her better roles. She seemed quite at home waddling about and flapping her little wings in a penguinish manner.

Fliss Dyndor did an excellent job not only by selecting two unique plays but also of giving great stage direction. Well done to all concerned!