Training has now begun for the new season. Sessions start at 3:00 p.m. at the Sports Field on Wappenham Road. Anyone 10 years or over is welcome to come and join us. For more information call Dave Bridger. 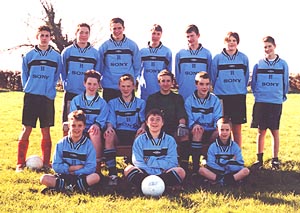 Up to twenty boys have continued training on Saturday mornings at the sports field and despite losing some of their friendly matches they eventually had their first success with a 6 - 5 victory over Radstone United followed by a creditable 2 - 2 draw against an Old Helmdon side very much older than the current side.

In the game against Radstone, Helmdon were able to turn out in their new kit which has been sponsored by Sony and our thanks goes to Miles Garner for arranging this together with Vanessa Vicars and the Monogram Company for sorting out the logos.

Although it was originally intended that there would be an age limit of 15 on the training sessions it has been decided that this will not be the case and training will continue next season for any boys or girls over 10 years old.

Thanks goes to John Watson, Gary Somerton and Dave Truelove for their help during the season. The date training commences will be advertised on the village notice boards and the web site.

In March 2001 the Sports Club began taking training sessions for the ten to fifteen year olds interested in forming a team to enter a local junior league. 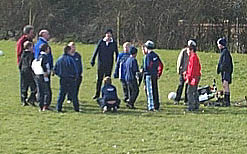 13 boys turned out for training in the first week

With the crisis involving the foot and mouth epidemic, it was decided to switch the venue from the sports field to the school field. The coaches were delighted to have thirteen boys turn up at the first session, which was basically a game to allow those present to get to know each other. This was particularly important, as there were a couple of boys from Brackley who did not know those boys from the village. With Geoff Watson on one side he was able to use his vast experience of playing for Helmdon in each of the last ten decades, to lead his team to victory. 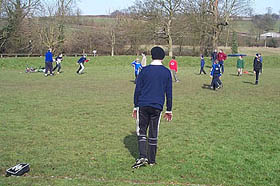 Old Trafford is only one step away

The second week we had an extra two boys turn up with several telling us that their friends were coming the following week. We started off with warm up exercises and then into a training routine which is designed not only to improve their fitness, but also their skills with and without the ball.

Unfortunately we had to call off the third week because of the adverse weather conditions, this was a shame but there was little we could do. It was very frustrating when we discovered there was hardly any snow in Brackley compared to that in the village.

We are always very pleased to welcome new players. For the foreseeable future we will remain at the school field and anyone interested in playing should come down on a Saturday morning from 10am to 11am or ring Dave or John.

The newly formed Helmdon football team had their last session before the summer break on 14th July. In atrocious conditions they took on some of the Dads in an end of season match determined to have the last word at the meal table during the summer holidays.

The Dads suffered from three drop outs before the game and once the Watson brothers arrived they had five players whilst the boys had eleven. The Dads used their experience and called on the services of the match referee Matt Sleath who played like an old man and was not therefore out of place. Not long after the start the Jenkins brothers arrived from Falcutt obviously not allowing for the time difference between Falcutt and Helmdon and Edmund joined the kids and David the Dads. Seven versus twelve!

The game started evenly and the Dads were kept in the game by the goalkeeping skills of John Watson who saved well from his son Tom and Tom Finch. The Dads began to take control and the lead when a cross by Dave Truelove was rifled home by the left foot of Graham Lipson. The Dads increased their lead when Geoff Watson seized on a bad clearance and scored with a right foot shot. 2 - 0 and the boys were not happy. Daniel Somerton and Matt Truelove worked hard in the middle and, but for another fine save by John Watson, Edmund Jenkins would have scored. However they were rewarded when after a communication problem between the Watson brothers the ball fell to Tom Finch who scored with a great shot from the edge of the area. The Dads would have increased their lead but for good defending by Luke Watson and Steven Lidgley.

By this time Gary Somerton and Dave Truelove were beginning to show their true skills were nothing to do with football, but the beer and the curry the night before. Dave was unlucky not to increase the lead and Graham Lipson also went close. The Kids equalised with a fine left foot shot from Geoff Bridger after his old man made a mistake. David Jenkins at this point of the match was proving his worth for the Dads as he was still running around and much as Geoff Watson tried his movements were more like Bambi on ice!

As the Dads tired the kids attacked more and nearly scored when Phil Bridger ran the length of the pitch and hit a fine shot which sped to the corner of the goal. However John Watson launched himself like an unarmed exocet and tipped the ball around the post for the save of the match. The respite was short lived as the kids scored a controversial third goal. The main controversy was the fact that Jamie Garner managed to pass to one of his own players. Whilst everyone else on the pitch was in a state of shock Tom Watson nipped in to score a third which was allowed after consultation with the Russian Linesman. The Dads were out on their feet, Gary Somerton tried to urge them on but couldn't get the words out, while Dave Truelove and Graham Lipson watched from the side. Then someone told Geoff Watson there was a beer at the end of the game, he picked the ball up at the half way line skipped around several defenders and scored with ease. It was PROBABLY the best goal of the game.

As we entered injury time John Watson nearly gifted the game to the kids when fumbling on his own line and whilst being berated by his team mates Matty Sleath finally woke up. Having established where he was and what he was doing he went up field and had a shot well saved but followed up to score the winning goal.

A good time was had by all despite the conditions and it was typical that when the final whistle blew it stopped raining within minutes.

A big thanks to those supporters who got soaked Janet and Alice who wouldn't have missed Graham running around for anything, Mr Finch and Jonty Bridger.

Training will start again in September we hope to mark out a pitch for training purposes at the Sports Ground. In the meantime thanks to all the boys and to John and Geoff for their help in getting the team going. 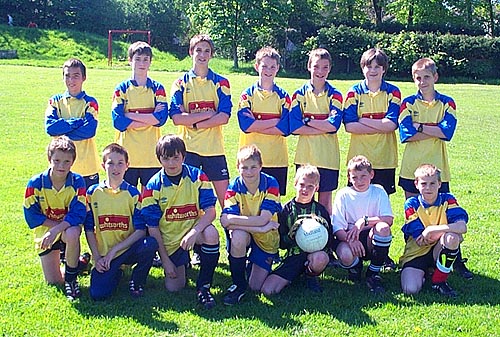 After several weeks training the newly formed Helmdon junior side had their first match at the school field on Sunday 20th May. The boys had been looking forward to the game and took to the field with an age range from 10 to 15. The Buckingham and Finmere side brought some enthusiastic supporters with them and we were pleased to see a fair crowd from Helmdon there to encourage the team.

The early exchanges were very even with both sides going close and but for an excellent save by Chris Lipson, Helmdon would have been behind. As it was Helmdon took the lead when they broke into the opponents half and Tom White had his shot well saved by the 'keeper but followed up to hit home the rebound. B & F then dominated for a while going close on several occasions before equalising eight minutes before half time when the Helmdon defence failed to clear their lines. The 1-1 scoreline at half time was a fair reflection on the play and the Helmdon side had held their positions and played very well as a team. 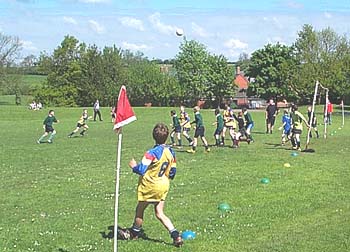 Some early goal mouth action, with Helmdon on the attack from a corner

The second half started with Helmdon on the attack, but despite forcing several corners Helmdon failed to capitalise and it was B & F who took the lead with a fine shot from the edge of the area. Once again the team fought back and despite missing some chances their luck changed when a shot from Edmund Jenkins was headed into his own net by the B & F defender. Unfortunately the joy of equalising was short lived as B & F took the lead after Lipson was deceived by the bounce of a speculative shot. After this the Helmdon team stopped playing as a team and too many players were trying to do their own thing by beating the opposition on their own. In addition they tired and the superior fitness of B & F team led to two late goals and by their own admission a flattering score of 2 - 5.

Overall it was a very pleasing first outing. B & F want a return fixture which is in the process of being arranged. The team themselves learnt several lessons as for many of them it was their first competitive match against boys older than themselves and the fact they were not as fit as they thought they were. The main thing was that they enjoyed it as did the opposition and supporters. The morning was rounded off with drinks and food at the Bell.

Training for the team will continue on Saturday Mornings (10am - 11am) until the schools break up for the summer holidays. These will continue at the school field and any one between the ages of 10 and 16 are very welcome. If you would like to speak to somebody first please ring either Dave or John.