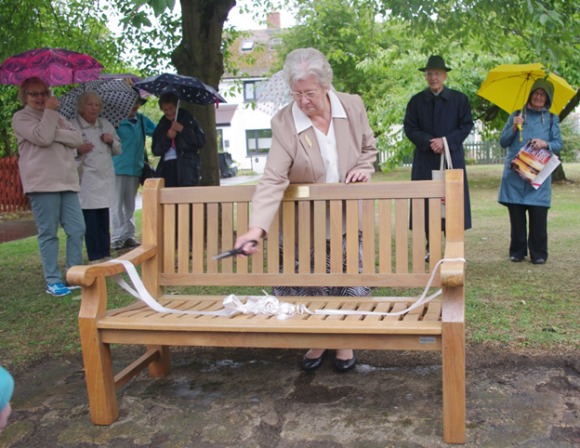 The Helmdon Fellowship has been in existence for 60 years and members celebrated it in style on Friday 10th August. The heavens opened after weeks of record hot sunshine but it did not dampen the spirits of the group of members who joined the Rev'd.Will Adams to dedicate the new seat on The Green. Will had been vicar at Helmdon when our 50th anniversary seat outside the church had been dedicated, so it was a pleasure to welcome him and Linda back to this new celebration.

A splendid buffet lunch followed in the Reading Room, then entertainment. The committee (Doreen England, Adrienne Watson, Barbara Buxton and Val Smith) were thanked for all their hard work, as were wine waiters John Coatworth and Cec Harrold, Diana Cliff (honorary committee member) and Doreen and Bill England who decorated the Reading Room. However, none of this would have been possible without the unflagging work and enthusiasm of the Fellowship Chairman, Carol Brookhouse, and heartfelt thanks must be extended to her. 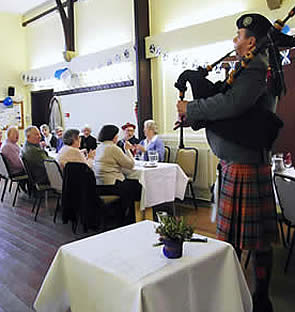 Haggis, Neeps And Tatties And A Scottish Piper At The Burns Lunch - posted 30 January 2018

"Come to the Burns Lunch", said Carol Brookhouse, Fellowship chair. Around forty members did, and were completely surprised and broke out into loud clapping as a tall Scottish piper, namely Richard Jasper, appeared, and the haggis was piped into the Reading Room with celebratory grace in the traditional way.

The meal was delicious as always – yes, we did have the neeps and tatties - and afterwards we were treated to a selection of Scottish songs by Richard on his guitar before his bagpipes came out again and we sang Auld Lang Syne.

Thanks to the committee as always, Carol Brookhouse, Rosemary Gulliver, Doreen England, Val Coatsworth, Adrienne Watson, Barbara Buxton and our ex-officio committee member Diana Cliff; to John Coatsworth and Cec Harrold who acted as wine (and whisky) waiters; to Doreen England who decorated the Reading Room and to anyone else who contributed to its success. It was a memorable occasion.