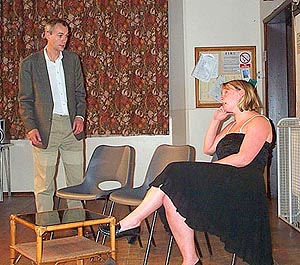 On set with the Helmdon Bridge Players

On the 14th and 15th June 2002 over 120 villagers packed in to the Reading Room to see the Bridge Players' Summer production "Don't Dress For Dinner" by Marc Camoletti.

The critics were unanimous in their praise of the Bridge Players latest summer production. "Pure entertainment", "I haven't laughed so much in my life" and "I laughed so much my jaw ached" were just a few of comments passed on to the cast and director by the discerning theatre going public of Helmdon.

Morag Underwood ambitiously chose to stage this French farce and after months of intense rehearsals and soul searching her faith in her cast was rewarded.

It would be beyond me to give an understandable synopsis of the play, suffice it to say it revolved around the extra marital shenanigans of Bernard (Dave Bridger) and the ensuing involvement of his wife, Jacqueline (Nicola Dent) his best friend, Robert (Paul Underwood) the lover Suzanne (Jo Ezzy) and a cook, Suzette and her husband, Georges (Bryony Coates and Gary Turner).

Dave Bridger managed to convey despair and hope in equal measure as his carefully crafted plans for the weekend unravelled at every turn. His bullying bravado was off set by Paul Underwood's bewilderment and cleverly understated creeping inebriation. 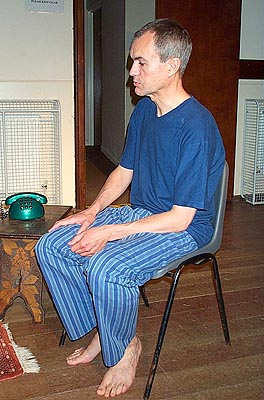 Robert (Paul Underwood) wondering
how on earth he got into this situation!

This was certainly one of Paul's finest roles and towards the end of the play when he delivered an impenetrable speech, full of double entendres and humour, he rightly received a spontaneous burst of applause.

Nicola Dent, the deceived (and deceiving) wife, undertook her role with the coolness and sophistication that befitted her character. She could change her well-modulated tones to venomous asides that Sybil Fawlty would be proud of.

Bryony Coates played an itinerant cook employed by Bernard to create a birthday meal for his girlfriend. The fact that both the cook and the girlfriend are known as Suzy is where the confusion lies. Bryony as the cook walks into a household where all sorts of deceits are being played and quickly manages to turn the situation to her own financial advantage. She does this with freshness and a great sense of fun. Bryony also bravely submitted to a new departure for the Bridge Players; an on stage costume change practically down to her underwear and it wasn't her taking the clothes off!

Jo Ezzy started off as a chic Parisian beauty whose expectations of a romantic weekend were dashed when she ended up cooking and skivvying in the kitchen. Jo's languid looks and artful comic pauses were used to great effect in this play and surely being able to throw 'sauce pollute' over Dave Bridger must have made all the hard work worth while.

Years working abroad have robbed the Bridge Players of Gary Turner's talents, until now. Gary's return to the theatrical fold was a glorious one. As the cooks husband he imbued his part with steely menace, a padded jacket and a welcome hint of sanity in what had become a mad house. His part in an on stage fist fight (another first) lent gritty realism to the proceedings. It's great to have him back.

Peter Fisher's set was an integral part of the play, the essential opening and closing of bedroom doors and some well chosen pieces of furniture, all of which withstood a brawl and dowsings with soda syphons, sauce veloute and ice cubes.

A great evening of which all participants and back stage people can be proud.