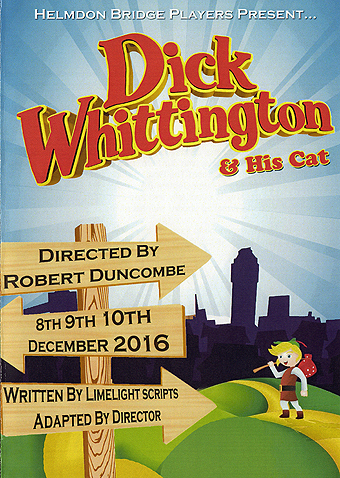 The plan was to assemble a troope of quality thespians to stage a production so awesome that it would go down in history as an epic. Unfortunately there wasn't time to do that so the Bridge Players put on a Panto instead!

Seriously though, this one will go down as an epic... how can the Bridge Players keep on getting better and better every single year?!

The Christmas Pantomime for 2016 was Dick Whittington and His Cat, adapted and directed by Robert Duncombe from a script by Limelight Scripts.

The story starts out in Belle End, the rough part of Cheapside in London. The city is overrun by King Rat (Becky Leitelmayer) and his hordes of hideous ratlings and is gradually falling under King Rat's control. But he hadn't reckoned on the arrival of the hero of the story, Dick Whittington (Beth Gordon) and his faithful feline friend Tommy the Cat (Rosie Gee). Dick Whittington has travelled to London where he believes the streets are paved with gold and he gets duped into digging holes by crafty council workers Spade (Francesca Fieldhouse) and Shovel (Zoe Dyndor). But Dick finds more than gold when he takes a job with Alderman Fitzwarren (Paul Underwood) and sees his daughter Alice (Emily Wright) with whom he immediately falls in love.

Fitzwarren's business is losing money hand over fist, because the rats keep breaking into the store and eating all the goods (and because lazy shop hand Idle Jack (Sarah Adhemar) is completely and utterly useless!). Fitzwarren's world-weary cook, Dame May O'Nays (Dave Bridger) does all she can but she's finding it increasingly difficult to put food on the table. Alderman Fitzwarren invests everything he owns in a trip to Morocco, where the Sultan has placed an order for five hundred barrels of Fitzwarren's finest treacle. Dick is put in charge of guarding the money to pay for a ship and crew but King Rat uses his powers of hypnosis to trick Alice into framing Dick - booo, hisss!! - to make it look like Dick has stolen the money. When Alderman Fitzwarren discovers the theft he tells Dick to leave town and not come back. Dick protests his innocence but it is to no avail.

By convenient plot all the protagonists are found aboard The Golden Duck bound for Morocco, captained by the totally inept Captain Bilgewater (Bryony Worthy) who has had more disasters than the Australian rugby team. Will they actually get to Morocco or will they all drown in the cargo of sticky treacle? King Rat isn't taking any chances and summons up a storm to take the ship down to the murky depths. But once again King Rat has underestimated the power of good to triumph over evil and his plan is thwarted by the intervention of Fairy Bowbell (Felicity Dyndor) who casts a spell over Jack, Fitzwarren and Alice to give them the ability to breathe underwater so that they can get to dry land.

The dry land they find is a "dessert" island (thanks to a Panto typo!) in Morocco. They are discovered hiding on the beach by Mustaph (Dan Toman) and Apu (Jasmine Bailey) and taken to the Sultan (Zoe Dyndor). The Sultan is furious that the cargo of treacle is now washing up on his beaches and wants to throw Fitzwarren in prison. Enter the Sultan's "beautiful" daughter, Florabunda (Morag Underwood) (does my bum look big in this?!), who is after Mr Right. First she sets her eye on Idle Jack, which sends him into a complete panic. But what Florabunda wants, Florabunda gets and the pair are set to marry first thing in the morning, with Alderman Fitzwarren and Alice to be executed. 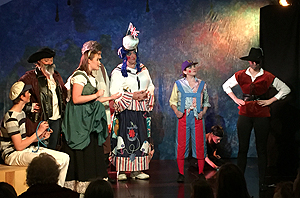 Luckily Dick and Tommy were also saved by Fairy Bowbell's spell and he now arrives to save the day. Dick finds the prison and sets about releasing Alice and her friends. But what about King Rat? He has also travelled aboard the Golden Duck and his ratlings look set to infest Morocco where, everyone knows (?), there are no cats to control them. The Sultan is so worried that he offers a reward of a ship and gold and jewels to anyone that can rid the land of the rats. Step forward our heroes, Dick and Tommy! Tommy sets about killing all the ratlings in the land until only King Rat remains. It's the final showdown... Tommy attacks King Rat but doesn't notice that he has a hidden knife and poor old Tommy lies stabbed and bleeding on the floor. Bowbell hands Dick a sword and he duels with King Rat. King Rat is winning and is about to run Dick through when Tommy summons up all his remaining energy and bites King Rat's ankle making him drop his sword. Quick as a flash Dick turns the tables and now it is King Rat with a sword to his throat. But this is Panto so King Rat can't die, oh no he can't, oh yes he can, oh no he can't! He begs for his life and ends up with an even more terrible fate - he takes Jack's place as Florabunda's future husband!

Of course, Dick must now declare his undying love for Alice and, dropping to his knee, asks Alice for her hand in marriage, which she eagerly gives.

The backstage crew surpassed itself too this year, the stage, props, costumes and makeup all being managed very professionally. The team includes John Coatsworth, Dave Dyndor, Val Smith, Angela Goodall, Debbie Rubino, Ros Spence, Ann Dyndor and Rachel Marland. The technical stuff worked (almost!) without a hitch too thanks to Matthew Dunkley and Alfie Adhemar.

Brilliant sounds were provided by a band with Alan Holmes on keyboard, John Plunkett on guitar, Stephen Sullivan bass guitar and Michael Fisher on drums.

And let's not forget the Head Honcho, Robert Duncombe, who directed the whole thing and wrote into the script the local "customisations" (plenty of mentions of Helmdon Parish Council!), which made it very funny indeed. It's not fair to compare one year against another but this Panto was at least as good as anything that has gone before and so all involved should be extremely proud.

I've been reporting on Bridge Players' productions for nearly twenty years but this was the very first as a parent of a cast member (Sophie Moody). I've always known that putting on the Panto involved an awful lot of hard work and dedication by a large group of people but I think I have a new-found appreciation for just how much goes into it now. I also have a better understanding of how the phrase "It'll be alright on the night" is said more in hope than anything else!

Putting on the Panto really is a monumental task and Helmdon is very lucky to have the Bridge Players providing such wonderful entertainment. Well done all.