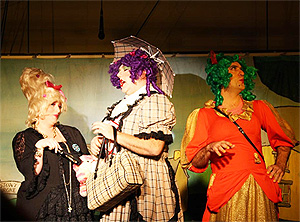 Edna Stavro Blowave Hardup (left) must have been
very proud of her daughters!

The action takes place in Helmdon, a very special village in Northamptonshire. Baron Hardup (Paul Stothard) lives in a big house but has very little money since his first wife tragically died and her married again to Edna Blowave (Becky Leitelmayer). Edna has a need for a great deal of money... both to satisfy her own greed and to fulfill her plan for world domination. The Baron's beautiful daughter, Cinderella (Jess Quiney), now has to take orders and insults from her new stepmother and stepsisters Marge (Dave Bridger) and Morticia (Gary Turner). Poor Cinders is downtrodden and miserable but life changes when edna decides to appoint a new butler. Mystery and intrigue surround the new butler and Edna seeks a team of secret agents to uncover the truth... but gets more (or less) than she expected!

The Dame, Edna Stavro Blowave and her two ugly daughters are in reality the leaders of SMOOCH, a secret organisation devoted to the destabilisation of our society. If Blowave can marry one of her daughters to the prince, she will have access to land she needs to create a super-tip where wire coat hangers and bicycle frames will be transformed into doomsday weaponry.

James Buttons (Fraser Turner) is the secret agent, charged with the task of undermining Blowave's scheme under the direction of the Head of M27, M (Paul Underwood). He applies for the job of footman at Hardup Hall and befriends Cinderella. Another applicant for the job is Gino Dandini (Hector Sharpe), the Prince's amorous personal servant. He sees Cinderella and arranges to invite her to the ball. Cinders is devastated when her ugly step-sisters steal the invitation. Buttons enlists the help of Q (Nicola Dent) to get her to the ball in a genetically modified pumpkin, and the Prince falls in love with her.

Unfortunately, Q's transformations cannot endure past midnight and Cinders is forced to flee. The Prince sends out his agents to find her and, despite some cheating by the ugly sisters his true love is found and they all live happily ever after!

This was the Bridge Players' twentieth anniversary Panto and the standard continues to be incredibly high. It's not fair to single out any individual performances - oh yes it is - oh no it isn't - but Gary Turner looked suspiciously comfortable in a dress and false boobs and Hector Sharpe followed up his hilarious Prince Wilhelm in last year's Panto with an even more accomplished performance as Dandini this year.

Your backstage crew this year was headed up by Director, Morag Underwood and Producer, Dave Bridger. Peter Fisher did another amazing job with scenery and a cast of thousands (well, dozens) worked feverishly behind the scenes to deliver a very polished, professional production.

Is there any village in the whole of England I wonder that can beat the talent and dedication of Helmdon's Bridge Players?