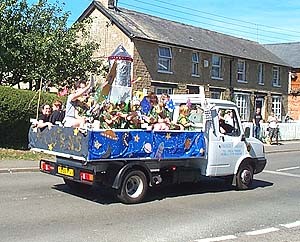 Carnival 2001 turned out to be one of the most popular and well attended events ever in village history.

The weekend kicked off in style on Saturday 25th August with a music evening with Ben Waters And His Band supported by Catalyst and everyone enjoyed a barbecue and bar in the sports field.

On Sunday afternoon the village were treated to another visit from the ever-popular Porterhouse Jazz Six, again with barbecue and bar to get everyone in the mood for the big carnival. The "six" were: Dave Arnold - drums, Martin Horsfall - trumpet, Colin Nash - clarinet, and Margaret Thompson - bass; the trombone was brilliantly played by Graham Allsworth, and there was the welcome appearance of guest banjo player Richard White.

The carnival processed through the village at 1.00 pm on a glorious bank holiday Monday led by the drums and symbols of the Army Cadet Band.

At the cricket field there were stalls, games and entertainment, as well as the serious business conducted inside the craft and produce tent where all classes were hotly contested.

In the absence of the sheep shearing, the rare breeds and the clay pigeon shooting the display of vintage tractors was the sole representation of the farming activities of the village due to foot-and-mouth restrictions on the transport of animals and the bringing of infection to farmland.

The Hinton Skydiving Display Team dropped in once again this year to provide a fitting finale for this most successful day. In all over 2,000 people attended and the money raised will go to village and local charities.

Helmdon Carnival Committee would like to thank all of the people who assisted in making this year's Carnival such an enjoyable event. We would like to thank the organisations and their members for their support, for the many people who gave up their time over the weekend, our sponsors and all of the people who attended the events. Sadly this year will be the last time our 'adopted archers' from Wappenham, Graham and Di Palmer, will be at the carnival, and we wish them well.

What The Papers Said

The 19th Helmdon Carnival was held over the Bank Holiday weekend.

It had a party atmosphere on Saturday, as Ben Waters and his band, backed by Catalyst, kicked off the three day event.

They played to a huge crowd on the sports field in Wappenham Road, as did the Porterhouse Jazz Six on Sunday afternoon.

The main event was the parade of floats, marching bands and people in fancy dress on Monday.

The procession travelled through the village concluding at the sports field, where there was an array of activities.

Secretary of the Helmdon Carnival Committee, Peter Burns, said: "The weather was good and we had the largest crowds ever."

All prizes were won, with winners gaining all manner of booty, including a trip around the British American Racing factory, a continental holiday, cinema tickets and whole range of other goods.

There has been no decision made yet as to which charities will benefit from the three days of fun.

Mr Burns said: "We don't spend the money before we get it!"

A decision will be made at the next committee meeting.

The proceeds of the Helmdon Carnival were distributed on Tuesday, 27 November in the Reading Room. Although the total raised was not as high as last year, everyone agreed that it had been very successful, particularly in the light of the fact that "foot and mouth" had delayed the arrangements and indeed curtailed the events on the actual day.

£700 was presented to David Brookhouse, the Chairman of the Brackley Cottage Hospital Trust. David said how much the Hospital appreciated the cheque, although the managers never counted on it being granted year by year.

£700 was presented to the Sports Club. Peter Burns said that the money was very welcome. As many people had already seen at the time of the Carnival, the pavilion had been renovated since last year and it was pleasing that this had coincided with a resurgence of interest in football, with more young youngsters coming through.

£700 was given to the Reading Room. Harold Seckington (Treasurer) said that the money would be very useful as the Reading Room has to renovate the toilets, putting in disabled facilities, at considerable cost, as soon as possible.

£200 was given to the Helmdon Fellowship. Carol Brookhouse said that the money was going to be put towards the construction of new cupboard space in the Reading Room. The Fellowship (of all over 60, and of retired people under the age of 60, who live in the village) is the perhaps the largest organisation in the village, and the money will be very useful.

£200 was given to Dr Tony Holden, leader of the Whistley Scout Group. Although the Scouts had relocated to new premises, many young lads still went from the village to join in a group, which drew in scouts from many villages around. He said that the money would be put to good use.