Captain Righteous and The Christmas Crisis 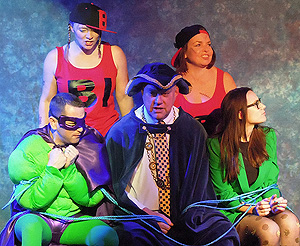 Could this be the end for Mayor Wheelybin
and Captain Righteous?

This year's Bridge Players Panto was Captain Righteous and the Christmas Crisis, with intrepid super-hero Captain Righteous using every super-power he can muster to save the kidnapped Mayor Grundon Wheelybin from the evil Red Claw, who is in cahoots with the GodFather of the city of Helmdonville, Al Cappuccino. Red Claw plans to take over the world and blow up Father Christmas and all his elves.

What the city needs is a hero, a man who knows no fear, a man who wears his underpants over his trousers! Fear not! For Captain Righteous is here! Defender of justice, enemy of the oppressor, champion of the people, doer of good!

The action begins in the hideout of Red Claw (Felicity Dyndor). Red Claw has become hungry for power and is also cheesed off that Father Christmas never brings her presents because she is on the "naughty girls" list. She hatches a dastardly plan with the help, or hindrance, of sidekicks Biceps (Bryony Worthy) and Triceps (Sarah Adhemar).

Wanting a slice of the action Al Cappuccino (Beth Gordon) and his henchmen Mr Linguine (Emily Wright) and Mr Macaroni (Alfie Adhemar) arrive and agree to help Red Claw for a share of the spoils.

But no one had counted on Captain Righteous (Huw Davies), protector of the city of Helmdonville! "Wherever tyranny and oppression rears it's ugly head, wherever women and children fear to walk the streets, wherever villains roam free; I shall be there to see that justice is done. But I am not alone in my fight, for I now have the help of my faithful sidekick; Sparrow!"

Poor old Sparrow (Ollie Leitelmayer) doesn't have it easy as a super-hero's sidekick, but he soon starts to discover the benefits of super-heroness when he begins to attract the attention of Miss Lucy Lockett (Gabrielle Atkinson).

So Red Claw and Al Cappuccino kidnap Mayor Wheelybin (Dave Bridger) and take him away to Red Claw's dungeon. The mayor's assistant and not-so-secret admirer Sally Stake (Andrew Hart) is distraught when she hears the news from Helmdonville's roving reporter Jenny Jenkins (Zoe Dyndor) and pleads with Captain Righteous to save the day. 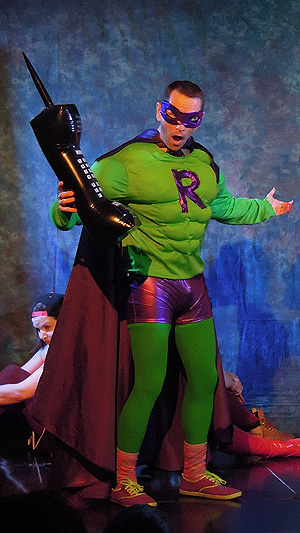 But everything does not go as planned. In fact Captain Righteous would be quite hapless without the help of Sparrow and his pet Wonder-Flea Gerald (Himself), a super-powered heroic flea with the strength of ten men!

With the help of Lucy Lockett and Gerald the Wonder-Flea the crime-fighting duo manage to rescue Mayor Wheelybin but can they stop Red Claw in her plan to wreak global havoc by blowing up the north pole and along with it, Father Christmas?

Red Claw and Al Cappuccino hurry to the military base in Helmdonville where they plan to force the boffins (Lucy Adhemar and Francesca Fieldhouse) in to launching a missile on the north pole. But Red Claw is thwarted when she doesn't know the command password for the the R-U-1-2 Computer (Rosie Gee) and she threatens her most evilest evil until R-U-1-2 tells her the password is "Burping Bottoms"! The missile is activated and now Captain Righteous only has 20 minutes to save the universe!

Luckily (and almost as if by magic!) Captain Righteous arrives just in the nick of time and with the help of the audience shouting out the password (just the kids, obviously) he overrides the missile launch and the planet is saved. Hurrah!

And so it all ends happily ever after. Captain Righteous sweeps Jenny Jenkins over her feet, Sparrow and Lucy Lockett are together, and even Sally Stake and The Mayor profess their love for each other! Red Claw is defeated. Al Cappuccino, Linguine and Macaroni are in "custardy" and, to the delight of all the children, Father Christmas (Himself) puts in an appearance to prove he is safe and sound.

All's well in Helmdonville and it's "all" down to Captain Righteous...

The Panto was directed by Becky Leitelmayer and Morag Underwood and they were supported by a band of helpers including set designers and builders, lighting, sound and projection engineers, musicians and make up artists. See a complete list of all the on-stage and behind-the-scenes stars in the Panto Programme (see link below).

This was a somewhat more complex production than usual but the whole crew gave a very professional and polished performance.

When the Bridge Players Panto comes round it always feels like Christmas has properly begun and this year the Panto has made it a very special start. Very well done to all the players and support crew. You can relax now; it's BEHIND YOU!!