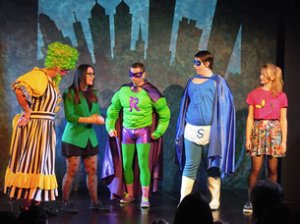 The Bridge Players were formed in the summer of 1988 and had their first production, the pantomime Cinderella, at Christmas that year.

We put on two productions a year, a play in the summer usually held in the Reading Room and a traditional pantomime at Christmas, held in the school.

The cast of the pantomime always includes children from the age of 9 and, when possible, a live band made up of local musicians.

We don't play bridge (!) but take our name after the humpback bridge in the middle of the village which straddles the old 'Nibble and Clink' railway line between Banbury and Northampton.

We are the drama queens of the village. The group was formed in 1988 in order to produce a panto - Cinderella. It was such a success that the group became more ambitious and included a summer production in its repertoire. Year by year the productions have become more sophisticated as our hard-working team of backstage crew display amazing creativity and resourcefulness to produce a high calibre of costumes, sets, sound and lighting. A large wardrobe of splendid costumes has been amassed over the years and is available for general hire.

Our friendly group operates on a shoe string budget with the ultimate goal being to provide a high quality of entertainment to the village. Whilst aiming high we try to ensure that everyone has fun although, when it comes to the inevitable last minute panic over lines and set - it sometimes feels more like punishment!

The panto is staged in the school and the summer play is usually in the Reading Room. Outdoor productions in the freezing cold have been tried as well - blankets and umbrellas were de rigueur on a midsummer's night - but the setting was magnificent.

We warmly welcome new members to our acting team or to help backstage - most of us have tried a bit of both. Our desire to improve our professionalism leads us, on occasions, to organise trips to the theatre to see if we can pick up some tips! We have a committee who try to make decisions but it is a very loose affair because we are after all...luvvies! For more information please contact us.