The 2015-16 Billiards Team had another pretty successful season. The team of four were the vastly experienced veterans Michael Ayres and Tony Wilson ably assisted by the young pretenders James Turnham and Tom Hurst.

The team played pretty consistently throughout the year performing well in both the league and cups. In the end the team finished 3rd in the league, one place better than last year, and won the Terry Annable Cup beating Foxhill in the Final. In the Individual Knockout Cup, James Turnham once again ended up as the beaten Finalist, unlucky James.

The 2014-15 Billiards Team had one of their most successful seasons for years. The team of four were the evergreen Michael Ayres and Tony Wilson ably assisted by the youngsters James Turnham and Tom Hurst.

Up until Christmas the team were once again floundering in the bottom half of the table and had been knocked out of the Cup, but a surge in performance in the second half of the season proved fruitful and with a final victory in the last match over Foxhill the team finished in 4th place and won the Clive Burbidge Cup for their second half of the year's performance. Although the team did not have much success in the Cup competitions, James Turnham once again shone in the Individual KO and ended up as the beaten Finalist. 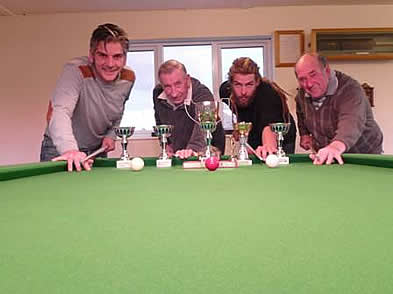 Whilst the team finished in the same league position as last year, sixth of the eight teams, performances were very much better and James Turnham also did very well in the individual competition bowing out at the quarter-final stage. James also picked up the trophy for the most sporting player of the season, which was well deserved.

The Billiard table is back up once again at the Sport's club pavilion. The new season starts on 7th October 2013 with a home match against Adstone commencing at 7.30pm.

The 2012-13 season was a close repeat of the previous year. The team once again finished two places above bottom, but did have three victories as opposed to only one last term and there were also more close matches this time round. Relative newcomers James Turnham and Geoff Crook improved on their average points per game this year, they were also able to give more support to veterans Michael Ayres and Tony Wilson during the year hence the better results. James also appeared in the semi-final of the singles tournament which was a fine achievement. We welcomed one new member in John Wilson, who is showing great promise and got very close to chalking up his first victory.

Billiards is a very skillful game which if learnt well enhances any cue players ability. The table is usually up from the end of September until the end of April so if there are pool or snooker players in the village who want to give billiards a go please contact either the secretary or any Sports Club committee member.

The Secretary of the club is Michael Ayres 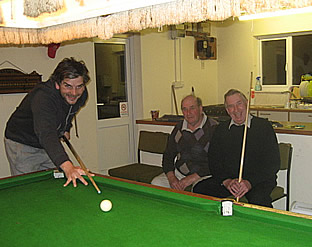 The Billiards Team (formerly the Men's Club) play in the sports pavilion every other Monday evening at 7.30 pm, the alternate Monday the match being away from home. It is affiliated to the Croughton & District Billiards League.

Having dropped out of the league for 12 months the team has been resurrected this year with two new players joining. The team for 2011 is Michael Ayres, Tony Wilson, Ken White, James Turnham and Geoff Crook.

Billiards may be perceived to be an 'old man's' game and as such is not played often by younger players, brought up on a diet of pool and snooker. However, it is a very skilful game which if learnt well enhances any cue players ability.

Should anyone from the village be interested in playing or learning the game please do not hesitate to contact the secretary or any Sports club committee member.

The Secretary of the club is Michael Ayres
Geoff Crook