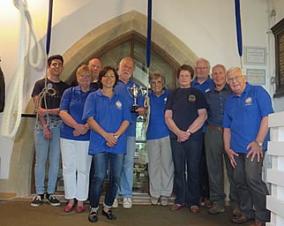 Bells and bell ringing In days gone by bells were an important part of the community and were used in many different ways. Here are just a few examples:

The early morning bell – a wake-up call to go to work.

The curfew bell – sounded at 8 o'clock every evening, all persons were ordered to extinguish fire and candles. It was also a signal for the closing of all taverns and ale houses.

The fire bell – an alarm to warn of fire.

The seed sowing bell – a bell rung ta daybreak during seed sowing time to call labourers to their work.

The gleaning bell – was rung during harvest-time, sometime in the morning and also evening to give warning when gleaning was to commence and must close for the day.

The harvest bell – this was the morning bell but was rung an hour earlier at 4am. during the harvest season.

The passing bell – when a person was believed to be dying the bell was rung to call people for pray for them. Twice for a woman and three times for a man. This was rung at all hours of the day and night.

The funeral bell – it was custom to toll the tenor bell for a few minutes about an hour before the funeral to give warning to the "bearers" and to the neighbours.

The pancake bell – to remind people of Lent.

The oven bell – used to inform the community that the baker's oven was heated and ready for use.

With the invention of clocks and technology and with the change in village working life and lifestyle, the bells are no longer required for these purposes. Today they are used to call people to worship, to celebrate a wedding or to celebrate the life of a departed one. They are rung in celebration of special occasions. Nationally there are 44,000 bell ringers, they come from all walks of life and range from the young to those in their eighties.

The churches in the Astwell Benefice have a keen group of ringers and if you would like to be part of this ancient art, why not get in touch with one of the Tower Captains and come along and have a try. We can guarantee it will be a challenge for you, good exercise for both the body and the mind, social interaction with a cross-section of people, and a sport of which you will never tire. 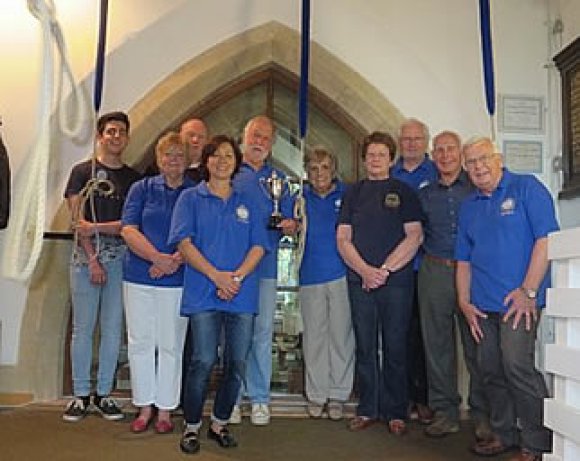 At the AGM of the Culworth Branch of Bell ringers, Helmdon were delighted (and surprised!) to be awarded The President's Cup. This was for the effort that they had made over the last year, ringing for most Sunday services and recruiting and training a new band member, Matthew Dunkley.

Helmdon is one of the few local towers who can boast that their Sunday ringers are all past and present residents of the village.

Recent ringing has commemorated St George's Day and the Queen's birthday. The band meet to practice most Saturday mornings at 9-30 and new or interested ringers are always welcome.

Helmdon church bells will be ringing with many other church towers across the country, on Wednesday 9th September at 5.23pm, to commemorate the outstanding length of the Queen's reign.

Bell Ringing is a very Ancient art but it is still really great fun today, so why not come along and join the "band" of ringers in the Helmdon Church Bell Tower. New recruits of all ages are always welcome and expert tuition will be provided to get you started.

The Church has 6 bells, the oldest originating from 1697, and we currently have 6 regular ringers from Helmdon with additional support from ringers from Brackley and Whitfield.

We practice on most Saturday mornings from 9:30 to 10:30am and ring when there is a service at Helmdon Church on Sundays from 9:30 to 10:00am, and we also ring for weddings and memorial services.

Our Tower Captain (Coordinator) is Julian Partis and our Mentor (Coach) is Chris Klein -Wassink who reformed the Bell Ringers of Helmdon 7 years ago. We do need your support to keep ringing so please contact us with a view to joining the Helmdon ringers.

Click here to see Historical Document No.9 (on Helmdon.com)

Our Church, St Mary Magdalene has six bells, the oldest originating from 1697. We were reformed five years ago by Chris Wassink and currently have six regular ringers from Helmdon plus Chris Wassink, with support from Pam and Malcolm Taylor. Phil Curtis and Ian Chapple provide additional help. Bell ringing is lots of fun and new recruits are always welcomed, so why not join the "band" of ringers in the Helmdon Bell Tower. Expert tuition will be provided by Ian Chapple who has trained nearly 100 ringers in his time. We practise on Saturday from 9.00 a.m. – 10.30 a.m. and also at weddings and memorial services. (Published in Helmdon Voice, Spring 2013).

The most satisfying part of this update is the progress being made by the whole team. We have practices every Saturday morning and have achieved our aim to ring for every Sunday Service throughout the year. Everyone is now proficient at handling each bell, and the hard work of method ringing has begun…..and hard work it is! Method-ringing is an art in itself and it is difficult to explain to non-ringers. It has a language of its own and is perhaps best described as solving a logic problem every few seconds, but with a weight of metal at the end of a rope to contend with at the same time! We are determined to succeed. As a team, we now each have royal blue polo shirts showing the Guild badge with Helmdon embroidered underneath.

The ringing balcony continues to be a joy and, after some unavoidable delays, work is now in progress to complete the necessary modifications. These include an urgent re-adjustment of the 3rd bell and changing the ringing position of the 2nd and 5th bells as well as an adjustment of the intrusive safety bar across the window. During the past few weeks, Ian Chapple from Whitfield and Julian Partis have put in hours of work dealing with these problems….and sincere thanks are due to them, together with Martin Rowling of Culworth who adapted the metal bar free of charge.

Over the past year, our team has rung for three weddings, and we have had a very interesting visit from a team of university ringers who, when they heard of our new ringing balcony, deliberately set about learning and ringing a method called "Helmdon Doubles" here. (They have given us copies and perhaps one day we may be able to ring it ourselves)

Helmdon Bellringers belong to the Culworth Branch of The Peterborough Diocesan Guild of Church Bellringers, and our branch is a very active one.

Saturday 7th May – There will be an Open Day for all towers in the Branch…when ringers from other areas will visit Helmdon Tower which will be open from 3-4pm.

Our sincere thanks to everyone who has helped our bellringing progress throughout the year….we are very grateful.

Learning to ring is a long process, but we are making progress. Our Saturday morning practices are lively and enjoyable, and we now aim to ring for Sunday Service as often as possible. Helmdon is one of twenty-one Churches in the Culworth Branch of The Peterborough Diocesan Guild of Church Bellringers, and at the A.G.M held in Brackley in January this year, we were delighted to be awarded the President's Cup … both for the work by Joe and Chris in teaching seven new ringers, and for the enthusiasm and achievements of the whole team.

The new ringing balcony is a joy and we are gradually perfecting it …. Joe has hand crafted the blackboard, and a personal donation has provide a carpet plus various fittings. Last year we were grateful to HYHO who donated a full set of made-to-measure muffles which we used for the first time on Remembrance Sunday. The window has been enhanced with six small stained –glass bells which were hand made by Denise's cousin in the U.S.A.

We have recently taken delivery of six urgently needed new bell ropes at a cost of just under £635. We very much appreciated a donation of £100 from Helmdon Parish Council, two personal donations of £50 each and a wonderful sum of £227.60 from a recent Bring and Buy coffee morning organised by Dorothy Micklethwaite and a large group of very willing helpers. Our thanks to all who helped. So far, we are unable to hang all the new ropes as some work has to be done in the ceiling to enlarge some of the "bosses" (holes through which the ropes pass!). Julian enjoys helping Joe with all this mechanical side of things.