Babes in the Wood

They've done it again. Just as you think the Bridge Players Panto can't get any better they prove you wrong with another awesome performance! This year the Panto was "Babes in the Wood", a Pantomime by Limelight Scripts. The co-directors were Bryony Worthy and Becky Leitelmayer.

The wicked Prince John (John Plunkett) has plans to capture and kill his brother King Richard's (Paul Underwood) children and claim the throne of England for himself. But he reckons without their faithful guardian, Nursie (Paul Stothard). Prince John enlists the greedy Sheriff of Nottingham (Fraser Turner) to do his dirty work for him, and he in turn employs two idiot baddies, Bashem and Thumpem. This turns out to be his mistake, and the babe's good fortune. 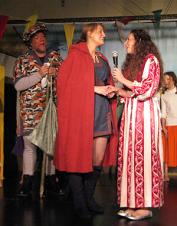 Hayrick (Dave Bridger) is Nursie's love interest but he does all he can to escape her clutches. Maid Marion (Georgia Crouch) knows that only her beloved Robin Hood (Karen Lowe) can save the day - and the babes - from the evil Sheriff. The babes, Rosie and Jim (Shannon Smith and Alfie Adhemar) are captured by Bashem & Thumpem but when they take them to the woods to kill them they can't go through with it. The babes are rescued, Robin wins Maid Marion's heart, King Richard triumphantly returns and yes - they all live happily ever after!

The production this year was better than ever and there was a hilarious performance from Morag Underwood as the Sheriff's dimwitted sidekick Pokem. Felicity Dyndor egged evil Prince John on as Queen Arachnid and debutante Karen Lowe was excellent as the hero, Robin Hood.

The main cast always have superb backing from the support actors and dancers. This year was no different with the Sharpe brothers, Hector and Laurence providing the slapstick as Will Scarlet and Alan-a-Dale. The dancing and singing was superb and Daniel Ezzy as one of the school children showed excellent comic timing when trying to get Hayrick in to trouble. Katherine Hart scampered round the stage playing Nursie's dog, Tyson.

You run out of superlatives for Helmdon's Bridge Players. All I know is that I'm already looking forward to the next one!