Alternative Therapy and Snake in the Grass 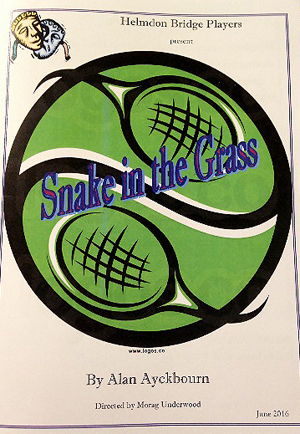 Snake in the Grass, a psychological, ghostly, black comedy thriller was preceded by a surreal, comedic skit about the mental impact of modern-day call centre technology, entitled Alternative Therapy. Both performances were superbly directed by Morag Underwood.

In Alternative Therapy, Paul Underwood delivered a captivating performance as a man in turmoil, without a word being spoken. His facial expressions clearly conveyed the angst suffered by many a caller to any automated telephone system. Meanwhile at the Therapy call centre, Val Smith, as receptionist, led the audience through the trials and tribulations of button pressing whilst nimbly knitting a natty little blue creation. Psychologists Jo Fitzroy Ezzy and Mark Lovett entertained with nifty dance scenes to the "on hold" music, wonderfully choreographed by Beth Gordon. Through comedic expression, the surreal insight to call centre communication could not fail to resonate, at least in part, with every single member of the capacity audience on both nights.

The main event, Snake in The Grass, by Alan Ayckbourn is set entirely in the neglected garden of the dilapidated Chester Family home. The play consists of only three characters, all of whom are female. Two estranged sisters, bereft with personal tragedy are reunited following the death of their father. They are joined by their father's blackmailing nurse who claims Miriam, the younger sister murdered the old man.

Annabel, the older sibling, is adeptly played by Zoe Dyndor, portraying her as a handsome but gaunt, confident but tense middle-aged woman. Bryony Worthy is excellent as nurse Alice Moody.

Becky Leitelmayer is convincing and comedic as Miriam, a rather vulnerable, weak individual who has cared for father over the last 30 years at the expense of her own liberty. As the play progresses, the sisters tetchy relationship evolves. As the demise of Zoe's character begins, it is macabrely balanced with the growing dominance of Becky's, both played out convincingly and passionately. The scenes are interjected with unexplained "ghostly" noises emanating from the overgrown tennis courts.

In an effort to avoid prison Miriam drugs Alice and drops her in the garden well. All is not as it seems however, and as the sisters share their tragic life experiences unexplained clanging from the tennis courts and hurtling tennis balls precede the lid of the well slowly raising up and the bedraggled Alice emerging. The stress and fright of the apparition of Alice leads Annabel to die of heart failure.

Bryony's portrayal of the ghostly Alice re-emerging was both shocking and amusing. Alice and Miriam are lovers. But, there's more, down-trodden, vulnerable Miriam simply says "Whoops!" when Alice attempts to switch on the garden lights and electrocutes herself. Having killed her sister and lover Miriam is then terrified when the depleted lantern flickers on, the wind chime tinkles, her father's chair starts to rock and she hears his voice call her name.

The complex twists and turns, changing emotional state of the three female characters, let alone the sheer number of lines to learn was outstanding. As one audience member stated "the best ever performance from The Bridge Players". Becky, Zoe and Bryony wonderfully directed by Morag with great backstage support totally knocked it out of the court!