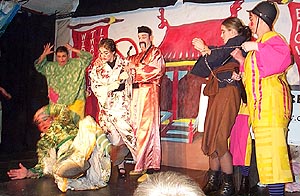 Madness and mayhem
- and that was just the audience!

The Bridge Players have done it again! Another side-splitting evening of entertainment laid on for the village at virtually no expense... spared.

Literally tens of people packed the school hall between the 5th & 7th December 2002 to see the 2002 pantomime, Aladdin... a performance that would have been worthy of the Derngate or the Apollo.

Aladdin is a boy who finds a magic lamp and its genie grants him his wish of marrying the beautiful princess. But wait! Will the evil Abanazar beat him to it? Will he use his magic ring to summon up all his powers of sorcery to make the beautiful Princess Baldroubadour (Sue Blackburn) marry him against her wishes? Can Widow Twanky, brash and boisterous (and totally over the top fashion wise!), put up with all the goings on at her laundry as well as helping to rescue the Princess from Abanazar's clutches? 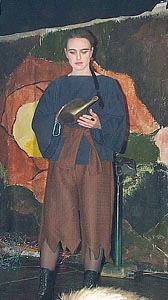 Aladdin trapped in a cave.
Who will rescue him?

The headline roll was played by Jo Ezzy, quite a change from playing saucy Suzanne in the summer play, but Jo showed that her acting talents cover a variety of styles, and her wonderful voice was used to good effect for several solos and duets.

Dave Bridger put in an energetic performance as Widow Twanky (not for dyslexics!) and was definitely the star of the show once again... what's that children? Oh no he wasn't!! Keeping one step ahead of Sergeant Ping (Bryony Coates) and Constable Pong (Morag Underwood) at all times, Widow Twanky did her best to make sure that her boy wins the heart, and money, of the Princess!

Wiggy Smith was hilarious (again) as Wishee Washee, mainly for the fact that she was the only one on the stage who wasn't acting - she was just being herself! The scene where Wishee Washee goes shopping for Widow Twanky had everyone in stitches! Her pet panda, named Typhoo (Geoff Bridger), kept trying to steal her bamboo, so Wishee Washee got the audience to keep guard of it, shouting out "BAMBOO!!" anytime someone went near it. All the children in the audience, big and small alike, thought this was tremendous fun!

The most polished performance was from David Austin who played the evil Abanazar. Although he had some of the most difficult lines, he was virtually word perfect throughout and had the audience hissing and booing whenever he came on. He used the Slave of the Ring (Tom Buckley) and the Slave of the Lamp (Jamie Garner) to help him perform his evil deeds - but to no avail, as good was to triumph over evil in the end! 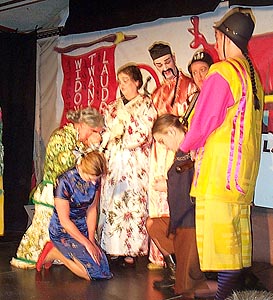 The Empress (Val Smith) and Emperor (Brian Austin) of China were at the centre of everything but could barely keep control of their subjects with only Ping & Pong of the Pekin constabulary for help!

The whole cast were admirably directed by Paul Stothard. Aladdin is a show for the whole family. The songs are drawn from children's cartoons, recent chart hits and old musical favourites. Everybody has something to get involved with. The chorus, which includes Bridge Players as young as 9 years old, put in another memorable performance. The Arabian dances really helped to set the scene and they all showed such confidence and durability to last out the four performances in three days.

The excellent set was built and painted by Peter Fisher, and a huge team of behind-the-scenes people managed lighting, costumes and props to ensure that everything would be all right on the night! Thanks to everyone that took part, whether your part was big or small.